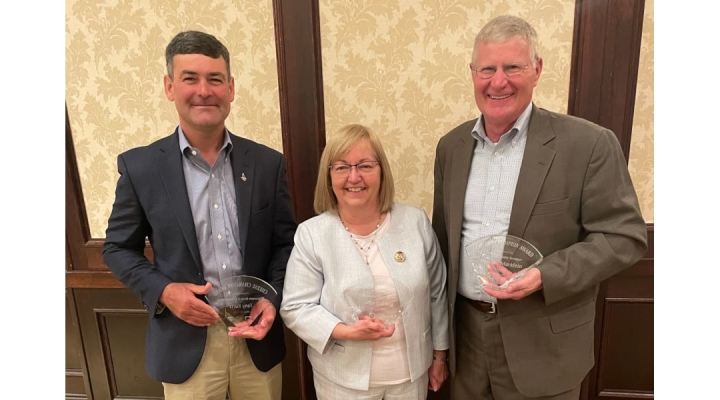 Among the awardees is U.S. Senator Tammy Baldwin (D-Wisconsin), who spearheaded the successful creation of the Dairy Business Innovation Alliance, a federally funded partnership between WCMA and the Center for Dairy Research that provides grants, technical assistance, and educational resources to dairy businesses across the Upper Midwest. Baldwin also authored the Dairy PRIDE Act, which would require the U.S. Food and Drug Administration to enforce its food labeling regulations, and advocated for investments in rural infrastructure including roads and broadband.

“Wisconsin’s dairy industry is a key driver of our state’s economy and vital part of our identity as Wisconsinites,” said Senator Baldwin. “I am proud to be an advocate in Washington for Wisconsin cheese, and look forward to continuing to work to build a brighter future for our dairy farms and move our rural economies forward.”

Sen. Ballweg and Rep. Kurtz were the lead authors of a proposal to create the $5 million Wisconsin Initiative for Agricultural Exports (WIAE), which devotes half of all funds to boost dairy exports over the next five years. The bill passed with bipartisan support in both houses of the legislature and was signed into law by Governor Tony Evers in December of 2021.

“I want to thank the Wisconsin Cheese Makers Association for recognizing me as a Cheese Champion,” said Sen. Ballweg. “I am proud of the work I have been able to accomplish this session through my role on Joint Finance and as the chair of the Senate Committee on Agriculture and Tourism. With the cheese makers’ support, I was able to advance legislation like the Wisconsin Initiative for Agricultural Exports and secure additional funding in the budget for dairy processing and promotion. I look forward to continuing to support dairy industry goals through my role on the Wisconsin Agricultural Export Advisory Council.”

“Our state’s cheesemakers lead the country in the production of cheese. As lawmakers, it’s critical that we support this important industry that contributes so much to our economy. I was proud to author and advocate for legislation that promotes and strengthens the dairy industry in our state,” added Rep. Kurtz.

Sen. Marklein, who represents more dairy processors than any other lawmaker in the state, played an essential role in establishing the Dairy Innovation Hub, and is key to its continued success as co-chair of the Joint Finance Committee. He also authored legislation to require that all products being sold as milk or cheese be made from real dairy, and led efforts to expand broadband to Wisconsin’s rural communities.

“I am honored to be named a Cheese Champion by the Wisconsin Cheese Makers Association! I represent the most hard-working cheesemakers in the state and I am honored to be recognized for our work together to promote and protect the traditions of cheese making in Wisconsin,” Marklein stated.

Pfaff said, “Agriculture is more than just economics in Wisconsin, it’s a way of life. Growing up on my family’s dairy farm taught me firsthand the importance of the dairy supply chain. I’m proud to have supported our dairy processors and pushed for opportunities to promote Wisconsin cheese both nationally and internationally. I’ve worked my entire life on behalf of our state’s family farmers and rural residents, and will continue to support the farmers and processors that make us ‘America’s Dairyland.’”

Now in its 130th year, WCMA serves as a voice for dairy processors, manufacturers, marketers, and industry suppliers on legislative and regulatory activity at the state and federal levels. More information on WCMA’s policy efforts is available at WisCheeseMakers.org.