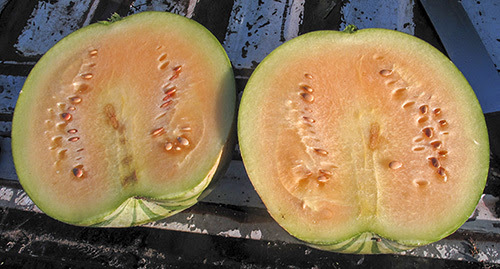 CHARLESTON, S.C. — A new watermelon line, developed by Agricultural Research Service (ARS) and Clemson University scientists, gets to the root of the problem of a major disease and pest of watermelon crops in the southern United States.

Carolina Strongback is a rootstock watermelon that is resistant to Fusarium wilt and the southern root-knot nematode, according to William “Pat” Wechter, plant pathologist with the ARS U.S. Vegetable Research Laboratory (USVL) in Charleston, South Carolina. Fusarium wilt, a soilborne disease that threatens vegetable crops, can stay in the soil for 30 years or longer, and fumigants used to control it are no longer available, he added.  In addition, watermelon is extremely susceptible to nematodes, which are especially brutal on crops in the Southeast.

Susceptible watermelons can be grafted onto resistant rootstocks of other vegetables such as squash and pumpkin to control certain pathogens, Wechter said. Grafting, which has been used in other countries for years, is a new concept in the United States.  Some watermelons grafted to squash rootstock have shown to be resistant to Fusarium wilt, but they were susceptible to southern root-knot nematode.

When tested in highly infested soils with fusarium and nematodes, Carolina Strongback performed well and maintained a high production level of harvested fruit, according to Wechter.

Selected for its grafting qualities and seed production, Carolina Strongback material can be used by seed companies, vegetable grafting companies and watermelon growers as a rootstock for growing susceptible watermelon cultivars in soils infested by the watermelon Fusarium wilt pathogen and root-knot nematodes.

ARS has filed a Plant Variety Protection (PVP) on this technology and is working with a commercial company on a licensing agreement. 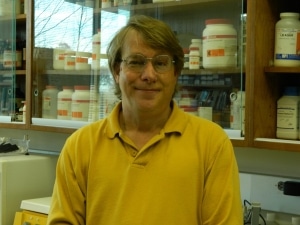 CLEMSON, S.C. — When Patrick Wechter was hired as the new Director of Clemson University’s Coastal Research and Education Center (CREC), moving into his new office didn’t require much logistical expertise. “Literally, if I’d cut a hole in the floor of my previous office, I could’ve just dropped into my new office,” Wechter joked. “I […] 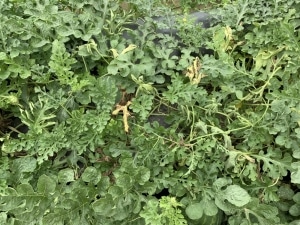 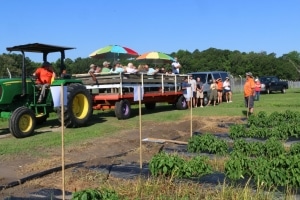 CHARLESTON, S.C. – Visitors to the 2021 Field Day at the Clemson University Coastal Research and Education Center (CREC) had an opportunity to see the latest research to help South Carolina vegetable growers overcome issues that may threaten their bottom line. Grafting is one tool the researchers use to help improve existing plant lines. Richard […] 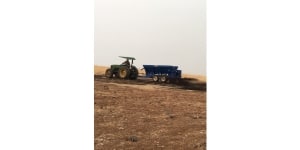 The first ever crowdfunded almond orchard