Home / DelMarVa / Watermelon harvest slightly behind, but still ‘looking pretty good’
A new user experience is coming! We'll be asking you to login to your Morning Ag Clips account March 1st to access these new features.
We can't wait to share them with you! Read more here. 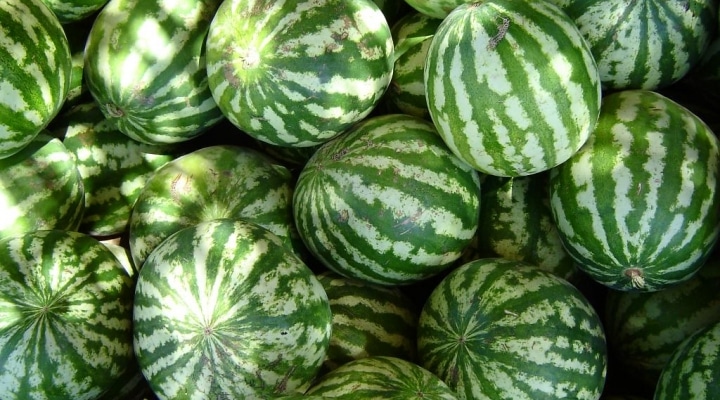 Virginians might need to wait a little longer for a fresh slice of watermelon this summer, but they can still expect a flavorful fruit. (photo by Ahmad, creative commons/flickr.com)

MONTROSS, Va. — Virginians might need to wait a little longer for a fresh slice of watermelon this summer, but they can still expect a flavorful fruit.

“We’ve had a lot of rain here that’s caused some setbacks,” said Gary Allensworth, a watermelon grower and member of the Virginia Farm Bureau Federation Specialty Crops Advisory Committee. “And we had some cool weather early, which also caused them to be late.”

Allensworth owns and operates Lois’s Produce in Westmoreland County, where he grows about 10 acres of watermelon varieties, including yellow flesh, orange flesh, Sugar Baby, seedless and large seeded watermelons. He said a deluge in June dropped several inches of rain on his farm in one afternoon.

“When it rains that much, water ponds up in the fields, and that causes issues with the crops,” he explained.

Allensworth typically picks melons by July 10, but he expects it will be another week before they’re ready to harvest. Although it’s delayed, he said the crop is on par with previous years.

“They’re coming,” he said. “And they’ll be good when they get here.”

“We had some reduced growth earlier in the season,” he said, “but the crops have come along since then.”

He attributes the reduced growth and slight delays to May’s dry weather, which impacted the beginning of the growing season. He added that growers also expect to start picking by the end of July, and “they’ll continue picking right up to Labor Day.”

Watermelons are grown throughout Virginia, but primarily in the southern and eastern parts of the state. According to the U.S. Department of Agriculture’s 2017 Census of Agriculture, the state’s farmers grew 773 acres of watermelon on 338 farms.

Sweet and juicy, watermelons are 92% water, so they provide a hydrating boost along with vitamins A, C and B6. When selecting a watermelon at a farm stand or in a grocery store, the National Watermelon Promotion Board suggests looking for one that is firm and free from cuts and bruises, and lifting it up to test its heft. A ripe watermelon should be heavy. Finally, turn the watermelon and look for a creamy yellow patch—also called the ground spot—where it sat on the ground and ripened in the sun.