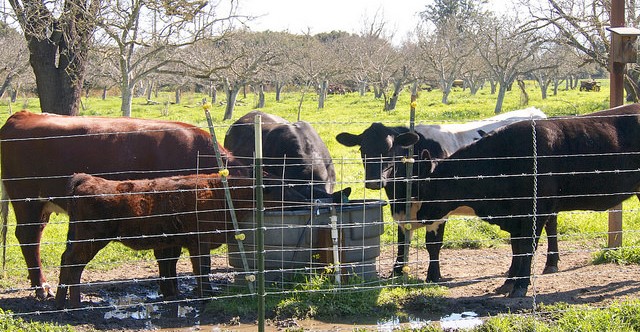 "Farmers do not see a problem because there are no clinical signs in cows; it is totally invisible," said Renata Ivanek. But in humans, the main shiga toxin-producing strain, E. coli 0157:H7, causes more than 63,000 illnesses per year and about 20 deaths, according to the Centers for Disease Control. (caligula1995, Flickr/Creative Commons)

ITHACA, N.Y. — A major study led by Cornell University College of Veterinary Medicine researchers reveals for the first time that water troughs on farms are a conduit for the spread of toxic E. coli in cattle, which can then spread the pathogen to people through bacteria in feces. The study was recently published in the journal PLOS ONE.

“Water troughs appeared in our mathematical model as a place where water can get contaminated and a potential place where we could break the cycle,” said Renata Ivanek, associate professor of epidemiology and the paper’s senior author. The hypothesis was then tested in the field – with surprising results.

People commonly acquire infections from shiga toxin-producing E. coli through cow feces-contaminated beef and salad greens. The main shiga toxin-producing strain, E. coli 0157:H7, causes more than 63,000 illnesses per year and about 20 deaths, according to the Centers for Disease Control. Though cows carry and spread E. coli 0157:H7 when they defecate, the bacteria do not make them sick.

“Farmers do not see a problem because there are no clinical signs in cows; it is totally invisible,” Ivanek said.

A vaccine to reduce bacterial shedding in cows exists, but the beef industry has little incentive to use it, partly due to cost, and the industry does not benefit from labeling beef as “E. colisafe,” Ivanek said. So Ivanek and a research team of 20 co-authors conducted a study to identify other ways to reduce the bacteria’s prevalence in cattle, which can vary over the year from zero to 100 percent of cows in a feedlot carrying the bacteria, with rates generally rising in the summer.

The group ran control trials in a feedlot over two summers. This involved reducing the water volume in troughs in randomly selected treatment pens and leaving the volume unchanged in control pens. They expected that reducing the water levels in troughs would prevent the spread of E. coli. Instead they found that it increased spread; in the treatment pens, the odds of finding shiga toxin-producing E. coli in cows was about 30 percent higher than in the control pens.

“Our modeling studies did pick up the right parts of the system,” Ivanek said, “but the mechanism that we postulated is the opposite from what we thought.”

More research is needed to determine why more water in troughs reduced E. coli in cows, but Ivanek questions whether the lower volume made it easier for cows to swallow debris at the bottom of tanks, or whether a fuller tank reduced E. coli concentrations.

Next steps include repeating the results in other feedlots, evaluating the effectiveness and cost benefit of using more water to reduce E. coli, investigating how seasons and temperatures play a role in prevalence of E. coli, and understanding the actual mechanisms that led to the results.

Do your children have questions about agriculture?
October 25, 2021