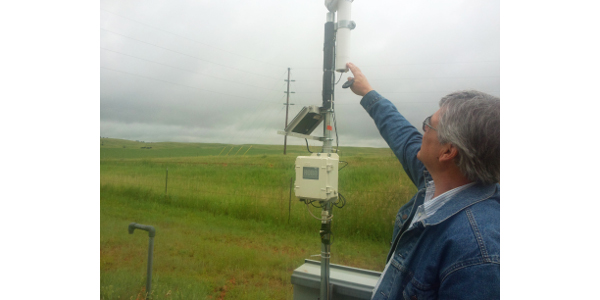 Michael Hove of the North Dakota Water Commission is involved in an NDSU research project to analyze water use in the Bakken oilfield. (NDSU photo)

FARGO, N.D. — Research that North Dakota State University scientists conducted on water use in the Bakken oilfield could benefit oil-producing areas elsewhere in the U.S. and internationally.

“The findings on impacts to water resources in the Bakken help shed light on future regional water impact analyses for other unconventional plays in the U.S. and around the world,” says Zhulu Lin, an assistant professor in NDSU’s Agricultural and Biosystems Engineering Department and the lead investigator on this research project.

Others involved in the research were Siew Lim, an associate professor in NDSU’s Agribusiness and Applied Economics Department; Tong Lin, a research assistant in NDSU’s Environmental and Conservation Sciences Program; and Michael Hove and William Schuh of the North Dakota State Water Commission. They’ve written an article about their research that will appear in the Journal of American Water Resources Association in February 2018. The National Science Foundation funded the study.

The researchers found that expansion of the oil industry in the region has led to tremendous increases in the demand for water. For example, from 2008 to 2014, water use for Bakken shale oil development increased nearly 20 times, from 550 million to 10,200 million gallons per year.

Here are some of their other findings:

The researchers also found that of the nine streams and 15 shallow aquifers under study, only three shallow aquifers (Charbonneau, Tobacco Garden Creek and Killdeer) in McKenzie and Dunn counties might have been affected by Bakken shale oil development (the average groundwater levels decreased).

The remaining 12 shallow aquifers and all nine small- to medium-sized streams had higher groundwater levels or increased average annual seven-day low flows, largely because the region received more than 20 percent more precipitation than normal during 2008-2014 and the water in the Bakken was managed adaptively.

Two main examples of adaptive water management strategies were the In Lieu Of Irrigation program, which allowed irrigation (mainly groundwater) permit holders to transfer the water temporarily from irrigation to industrial water uses such as hydraulic fracturing for the oil industry, and the issuance of temporary water permits (mainly surface water). These temporary permits allowed the permit holder to use a certain amount of water for a period of not more than one year.