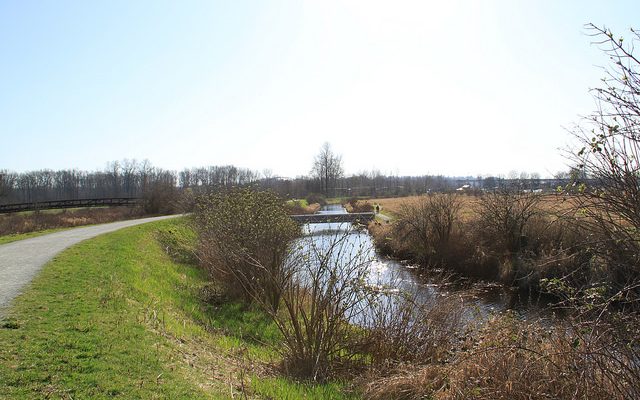 Iowa voters approved creating a fund to support the state's natural resources, but funding it requires legislative action. So far, that's been difficult to obtain. (Simon Fraser University via Flickr)

CEDAR FALLS, Iowa (AP) — With Iowa lawmakers gearing up for another battle over funding water quality improvements, a small northeast Iowa watershed group is making a direct plea to state residents to help finance their efforts.

Miller Creek watershed supporters hope to raise $100,000 in the months ahead to help farmers plant cover crops, build bioreactors and tackle other conservation practices that will reduce runoff, reported the Des Moines Register .

The district had about $27,000 in water-quality practices it was unable to fund this year, an amount that it expects will climb to $100,000 over three years, said Shane Wulf, the Miller Creek watershed coordinator.

“The Miller Creek watershed project is a victim of its own success. … It’s generated so much farmer demand for practices that they ran out of money” this year, said McMahon, director of the Iowa Agriculture Water Alliance, backed by soybean, pork and corn producers.

The effort is unique for its broad appeal to Iowans interested in supporting water-quality efforts, said McMahon, whose group plans to give the Miller Creek watershed project $13,500.

It also occurs as Iowa leaders struggle to come up with a substantial long-term source of money to address water-quality problems.

The money will help farmers meet their goal to plant half the watershed’s 42,000 acres with cover crops, McMahon said.

Already, about 20 percent of the Miller Creek watershed is blanketed in cereal rye, radishes and other cover crops, outpacing efforts statewide.

“We don’t want to lose this momentum,” said Jeri Thornsberry, chairwoman of the Black Hawk Soil and Water Conservation District Commission, one of the groups supporting watershed improvements.

The Miller Creek watershed, sitting just south of Cedar Falls-Waterloo, feeds into the Cedar River that flows to Cedar Rapids and other downstream cities and towns. It’s one of 16 watershed demonstration projects the state is funding to cut nitrogen and phosphorus losses.

The state seeks to cut the nitrogen and phosphorus levels entering Iowa’s waterways and making their way to the Gulf of Mexico. The nutrients contribute to the Gulf dead zone that this summer was about the size of New Jersey, a new record.

“They’ve had some amazing success, and they’ve set their sights higher,” McMahon said.

The donated money will go to help meet farmer demand over the $172,000 that will be available for conservation practices over the next two years, Wulf said.

Farmers and landowners must at least match the district’s dollars, under a 50-50 cost-share approach.

The Miller Creek watershed initiative, including education outreach, water quality monitoring, soil sampling and other activities, will get about $1 million in state funding through 2019.

Many farmers want to try cover crops in the watershed, where nearly 90 percent of the acres are in row crops, said Thornsberry, the Black Hawk soil and water commissioner.

Planted in the fall, cover crops help hold soil in place over the winter and keep fertilizers from running off in the spring, when Iowa typically gets heavy rains.

Cover crops build soil health when they die or are killed off before corn, soybeans or other cash crops are planted.

Statewide, only about 2 percent of Iowa’s 30 million farm acres are planted with cover crops.

“We have people who have never tried cover crops, who were reluctant to try conservation practices, are now saying, ‘I want to incorporate this into my farming practice,’ and we’re out of money” for the year, Thornsberry said.

The work is important for the Cedar Rapids region, which saw massive flooding in 2008 and 2016. Flooding caused an estimated $2 billion in damages nine years ago, and about $22 million last year.

In 2016, Iowa had 750 water bodies with 1,096 impairments, meaning the waters may be unsafe for recreation, fishing or other uses, the Iowa Department of Natural Resources reported.

Miller Creek’s increasing grower interest in cover crops is greening the watershed, Thornsberry said. “It brings a smile to my heart,” she said.

Louis Beck is one of watershed farmers adopting conservation practices.

Beck has been adding grassed waterways to slow water from leaving his farm as well as “no-tilling” farming for a decade — not using a plow to turn over the soil before planting, which helps reduce soil erosion and builds soil health.

“It’s been interesting — and challenging — but I think we’re beginning to see some benefits from it” with improved yields in areas with poorer soils, Beck said.

“The problem areas, with lighter soil or compacted soil, don’t seem to be as bad anymore,” he said, adding that area farmers share information about when best to seed cover crops and the best varieties to use.

“We’re constantly comparing notes, talking and working toward the same goals,” Beck said. “We want people to know we’re taking the best care we can of our land.”

Uncertainty about state funding played a role in the fundraising decision, Thornsberry said.

Despite calling it a top priority, state lawmakers have failed to pass long-term sustainable funding for water quality improvements in the past two sessions.

Legislative leaders said the issue will get quick action in the 2018 session.

“I think it’s great,” she said. “People support what they help create through their investment, so there could be a lot of benefits.”

But Robinson said it’s not a long-term solution to cleaning Iowa’s water.

Iowa voters approved creating a fund to support the state’s natural resources, but funding it requires legislative action. So far, that’s been difficult to obtain.

“We need a structure … that addresses broader issues, such as flood control,” Robinson said. “Many of our watersheds are impaired because of bacteria.

“And practices such as bioreactors that address nitrates don’t do anything to address bacteria,” she said.

“We need a full range of tools … to tackle all the issues in watersheds that are important to local people as well as those downstream.”

“It could be a shot in the arm that people are with us,” he said. “I could be very encouraging to farmers.”