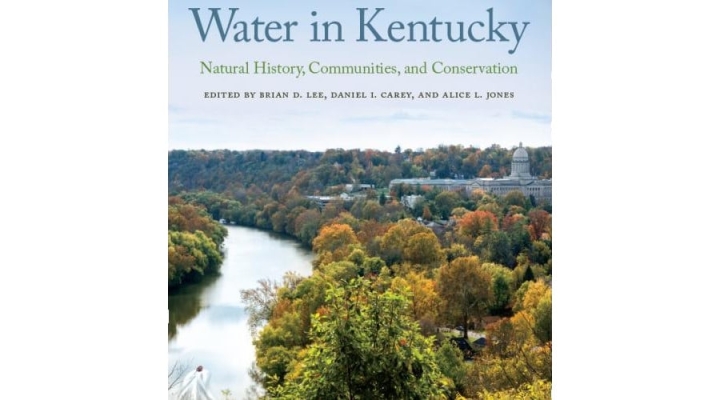 Water in Kentucky is more than just a collection of history; it also offers recommendations for the ongoing protection of the state's natural resources. (Courtesy Photo)

LEXINGTON, Ky. — The Bluegrass State is well known for the splendor of the Appalachian Mountains, its extensive cave network and gorgeous forests, boasting a biodiversity that rivals most any state in the country. But without the waterways that flow throughout the state, none of these natural marvels would be possible. For thousands of years, the commonwealth’s lakes, springs and rivers have encouraged expansion and impacted Kentucky’s history, from its earliest settlements to present day.

In celebration of the 50th anniversary of the Clean Water Act, the landmark law that greatly improved Kentucky’s waterways, the University Press of Kentucky will run a special promotion on the book “Water in Kentucky: Natural History, Communities and Conservation,” which compiles environmental, economic and personal histories and stories related to Kentucky’s water.

Through essays from researchers, professionals and environmentalists who talk about the “how” and “why” of water degradation and restoration, the book shows the close relationship between water and the state’s physical, cultural and economic landscapes. The book includes more than 130 color images, including maps of Kentucky’s waterways and photographs from the University of Kentucky’s Robinson Forest. Kentucky’s water issues are explained in these stories, which debunk urban legends and illustrate possible paths to achieving water goals.

“’Water in Kentucky’ is an effort to bring knowledge from several sources across the state into one source,” said Amanda Gumbert, UK College of Agriculture, Food and Environment extension water quality specialist and a contributing author of the book. “There are many people highlighted in the book who bring their expertise to the table.”

After an unsuccessful attempt to pass the Federal Water Pollution Control Act of 1948, Congress successfully enacted the CWA, also known as the Federal Water Pollution Control Act, in 1972 to reestablish and protect the nation’s waters as public concern over the state of the country’s water and environment grew. This statute reformed efforts to control pollution in the nation’s waterways and in 1977, Congress further updated the CWA to control the flow of untreated wastewater from towns, industries and companies into rivers, lakes and coastal waters.

“Before the CWA, we had just a lot of pollution in our waters,” Gumbert said. “It was a really common thing and an unfortunate side effect of industrialization. It was widely accepted that at certain times of the year, some rivers might catch on fire or be an odd color. Some communities just accepted it. With the development of the CWA, we’ve seen a significant improvement in water quality across the United States. We don’t have big industrial pipes that just pump toxic sludge into the rivers anymore.”

The book is more than just a collection of history; it also offers recommendations for the ongoing protection of the state’s natural resources. The authors present how water has changed the lives of Kentuckians since the state was first settled. They also look at the complicated relationship between people, landscapes and waterways through detailed analysis and case studies.

To learn more about the book and how to purchase, visit https://www.kentuckypress.com/9780813168685/water-in-kentucky. As a limited-time offer, purchasers will receive a 30% discount by using the code FRESHWATER. For more on the impact of the CWA in Kentucky, visit Ripple Effects, a student photography exhibit created in partnership between the Louisville Free Public Library and the Salt River Watershed Collaborative on display at the 2022 Kentucky State Fair.

Milk your corn silage for all it’s worth