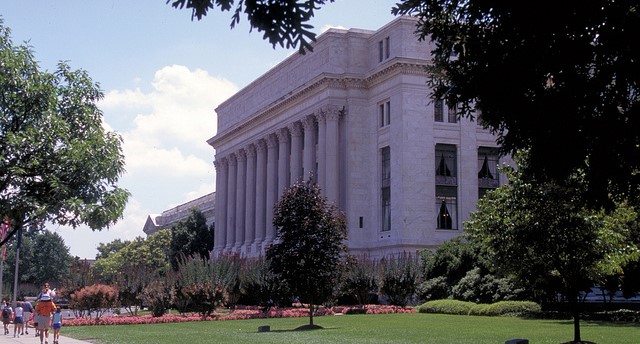 The Economic Research Service is responsible for providing research and analysis to USDA and other federal agencies, as well as the White House and Congress, on topics such as food security and safety, agricultural economy and natural resources. Above: The Jamie L. Whitten, Federal Building, U.S. Department of Agriculture in Washington, D.C. (U.S. Department of Agriculture, Public Domain)

WASHINGTON (AP) — The USDA’s internal watchdog will examine the agency’s plan to restructure its top independent research office and move it out of the District of Columbia, actions some lawmakers and staff fear could leave research on contentious issues like climate change and the social safety net vulnerable to political pressures.

The Economic Research Service is responsible for providing research and analysis to USDA and other federal agencies, as well as the White House and Congress, on topics such as food security and safety, agricultural economy and natural resources.

USDA Secretary Sonny Perdue in August announced a plan to move it, and another research office, the roughly 400-person National Institute of Food and Agriculture, to a yet-undetermined location outside the Washington area by the end of 2019. The plan also called for ERS to be moved from the Under Secretary for Research, Education, and Economics to the Office of the Chief Economist, which directly advises Perdue on the economic impact of USDA policies.

A USDA spokesperson said Thursday that the relocation would place the two offices closer to stakeholders, cut down on unnecessary costs and help with recruiting efforts, which Perdue claims have been sluggish.

Some agency employees and scientists are concerned this could result in the politicization of an office that serves as the neutral analyst for the USDA. The Trump administration had already proposed slashing the office’s budget and eliminating “low-priority research.”

Hoyer and Norton sought the inspector general review, questioning whether USDA can legally relocate an agency without congressional approval or budget authority.

The lawmakers said Thursday the review will determine whether the USDA followed proper procedures and conducted a cost-benefit analysis.

Last week Perdue announced the agency has received 136 expressions of interest from parties in 35 states interested in becoming the new home of the two offices.

EPA approves dicamba use in Arkansas