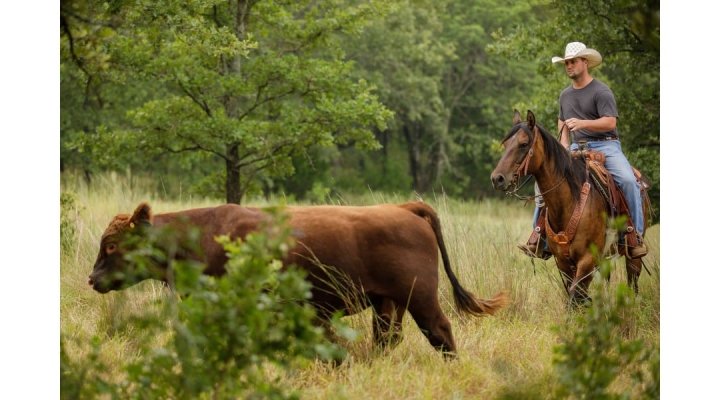 ARDMORE, Okla. — Both summer and fall are important times for ranchers to keep an eye on cattle that graze where Johnsongrass is present, due to the risk of prussic acid toxicity.

“Anything that physically stresses Johnsongrass, such as drought in summer or freezing in the fall, can increase the amount of prussic acid in this invasive forage plant,” he says. “Secondly, with rain after drought, or warm temperatures after a frost, the fresh, green growth is one of the first things the cows will go after. That’s the danger, because those young leaves are higher in prussic acid.”

Prussic acid, known as hydrocyanic acid or cyanide, can form in plants in the Sorghum genus in different concentrations, depending on the species. Johnsongrass, grain sorghum and sorghum almum (Columbus grass) are all on the high end. As Roberts explained, the prussic acid, which can be fatal, is more concentrated in the leaves, especially younger leaves in the upper part of the plant, and more so during rapid regrowth after drought or frost injury.

Roberts manages cattle and sheep, focusing on applying the six soil health principles. He says there are steps one can take to try to prevent ruminants from ingesting too much Johnsongrass when it is in highly toxic stages. They include:

Having polyculture pastures divided up into paddocks with temporary fencing is helpful, Roberts says, because it offers options for moving livestock quickly to manage timing and location of grazing.

“It also helps to have diversity so the cattle can select other forages other than Johnsongrass to graze,” he says. “Plus, I can observe my animals every day and that’s going to be especially important this year.”