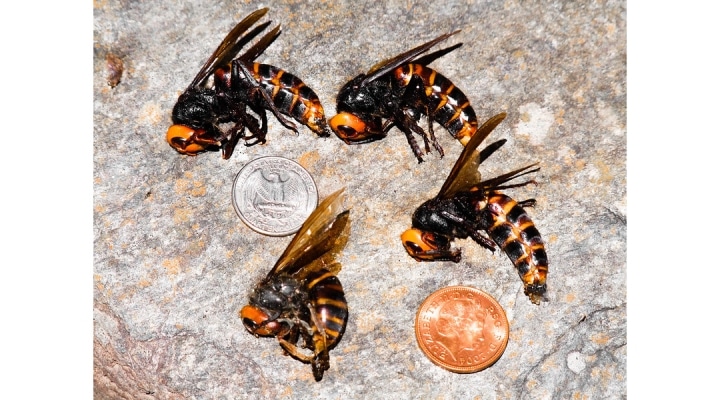 The Asian giant hornet — the world’s largest at 2 inches (5 centimeters) — can decimate entire hives of honeybees and deliver painful stings to humans. Farmers in the northwestern U.S. depend on those honey bees to pollinate many crops, including raspberries and blueberries. (Stock photo via HYAKUNEKO, Flickr/Creative Commons)

SEATTLE (AP) — Washington state officials said Monday they were again unsuccessful at live-tracking a “murder” hornet while trying to find and destroy a nest of the giant insects.

The Washington State Department of Agriculture said an entomologist used dental floss to tie a tracking device on a female hornet, only to lose signs of her when she went into a forest.

The hornet was captured on Oct. 5 and kept alive with strawberry jam, which she seemed to enjoy, said Sven Spichiger, a department entomologist.

Scientists then tied a tracking device onto her body and released her two days later onto an apple tree. They lost track of her after she went through some blackberry bushes, though officials believe the tracker was still attached at the time of its last signal.

“This one was a lot feistier,” Spichiger said.

A total of 18 hornets have been found in the state since they were first seen last year near the U.S.-Canadian border, the agriculture department said.

Officials earlier in the month reported trying to glue a radio tag to another live hornet so they could follow it back to its nest, but the glue did not dry fast enough. The radio tag fell off and the hornet ultimately could not fly.

The Asian giant hornet — the world’s largest at 2 inches (5 centimeters) — can decimate entire hives of honeybees and deliver painful stings to humans. Farmers in the northwestern U.S. depend on those honey bees to pollinate many crops, including raspberries and blueberries.

Despite their nickname, the hornets kill at most a few dozen people a year in Asia, and experts say it is probably far less. Hornets, wasps and bees typically found in the United States kill an average of 62 people a year, the Centers for Disease Control and Prevention has said.

The real threat from the ”murder” hornets is their devastating attacks on honeybee hives, and the time of year when they attack those hives is nearing, Spichiger said. He called it the “slaughter phase.”