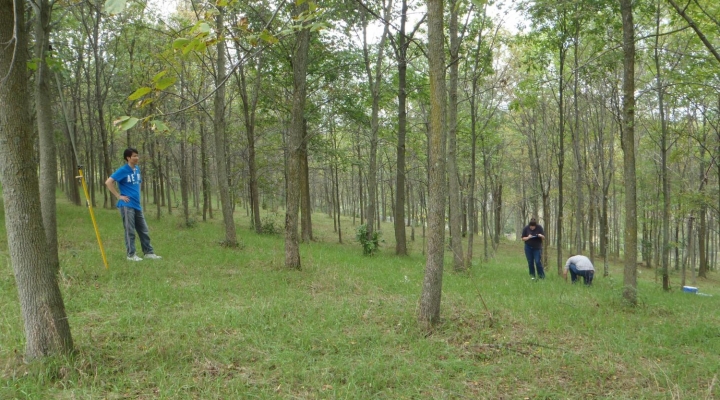 Students taking tree measurements in Penn State's green ash provenance trial are shown in this photo, circa 2000. Almost all the trees are dead and gone now, victims of the emerald ash borer. However in the decades before they died — along with ash trees at other university trials and plantations and U.S. Forest Service installations — they offered an unprecedented perspective on how forests may be changed by a warming climate. (Credit: Kim Steiner / Penn State. Creative Commons)

UNIVERSITY PARK, Pa. — Since the 1990s, scientists have been predicting that North American tree species will disappear from portions of their ranges within the next 50 to 100 years because of projected changes in climate. A new study led by Penn State forest biologists sheds doubt on such sweeping forecasts.

“Our findings should inject some skepticism into this discussion,” said lead researcher Kim Steiner, professor emeritus of forest biology in the College of Agricultural Sciences. “We know that species distribution models based only on climate are biologically imperfect. However, they are the best we have for predicting where species would be found in a climatically different future, and it is extremely difficult – especially with trees – to experimentally test and possibly refute such predictions.”

In recent years, as the limitations of species distribution models have become more widely acknowledged, scientists have tended to temper their predictions of future extinctions. “Unfortunately,” Steiner said, “even if they are admittedly conditional and based on incomplete models, alarming predictions tend to become conventional wisdom because they get a lot of press attention.”

Because trees grow slowly, it takes decades to draw accurate conclusions about their ability to survive in an altered climate, added Steiner, who recently retired as director of The Arboretum at Penn State. He explained that this study focused on an experimental test of what happens when populations of two eastern North American tree species were moved to warmer or colder climates for an average of 35 years.

“This was a legitimate approach to the question because extinction is a population-by-population process,” Steiner said. “We know from many decades of research worldwide that wild tree populations are genetically better adapted to their native climates than to climates elsewhere,”

In the plantations, which were scattered among six states from Maine to Kentucky to Kansas, scientists grew trees from 56 green ash populations and 46 white ash populations in environments that were to varying degrees warmer or colder than the trees’ native environments. The researchers “imposed” climate change by moving trees to novel environments, and then measured their response in survival and growth as a function of the climatic distance of the move.

The researchers, who recently published their findings in Diversity and Distributions, reported that they could detect no significant mortality associated with climatic displacements of as much as 7 degrees Fahrenheit in either species — which is greater warming than expected in this century based on most climate models. Also, they found 40% or greater survival in most instances of ash populations exposed to warming levels of 12 to 18 F.

“We saw evidence of physiological adjustment, which is something to be expected in trees that are capable of living for centuries in changing environments,” Steiner said. “Trees moved from warmer climates were initially relatively fast-growing but slowed down with time, and trees moved from colder climates were initially relatively slow growing but sped up with time. Physiological adjustment is not accounted for in species distribution models.”

No populations suffered 100% mortality at any location, researchers reported, and it appeared that this would continue to be the case until at least age 50. Results show, they concluded, that trees are much more capable of enduring 50-100 years of novel climates than is assumed in predictions based on species distribution models.

Ironically, the trees on which the research was based are almost all gone now. An invasive insect, the emerald ash borer, has since destroyed most plantations, but at the time of measurements it was either not present or present in such low numbers that its effect on survival and growth was negligible.

“Emerald ash borer was unknown to Americans when these studies were begun,” said Steiner. “We would have wrongly predicted the death of trees from climate change if people had been doing such research, but we would have completely missed the destruction caused by this insect.”

The U.S. Department of Agriculture’s Forest Service and USDA’s National Institute of Food and Agriculture supported this work.