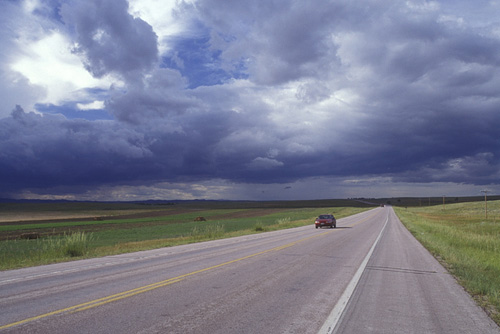 How would today's weather patterns look in a warmer, wetter atmosphere – an expected shift portended by climate change? (Mark Goebel via Flickr)

Colorado State University researcher Kristen Rasmussen offers new insight into this question – specifically, how thunderstorms would be different in a warmer world.

The assistant professor of atmospheric science works at the interface of weather and climate. She is lead author on a new paper in Climate Dynamics that details high-resolution climate simulations across the continental United States. Her results suggest that extreme thunderstorms, or what atmospheric scientists call convective systems, will increase in frequency under a warmer climate scenario. This shift would be caused by fundamental changes in thermodynamic conditions of the atmosphere.

For the study, Rasmussen employed a powerful new dataset developed by the National Center for Atmospheric Research (NCAR) in Boulder, Colorado, where Rasmussen completed postdoctoral work before joining the CSU faculty in 2016.

The scientists generated the enormous dataset by running NCAR’s Weather Research and Forecasting model at an extremely high resolution of about 4 kilometers (about 2.5 miles), across the entire contiguous U.S. Typical climate models only resolve to about 100 kilometers (about 62 miles) – not nearly the detail available in the new dataset. Included in the new data are finer-scale cloud processes than have been available in previous climate models.

Using the dataset and collaborating with NCAR researchers, Rasmussen led analysis of detailed climate simulations. The first control simulation included weather patterns from 2000-2013. The second simulation overlaid that same weather data with a “pseudo global warming” technique using an accepted scenario that assumes a 2- to 3-degree increase in average temperature, and a doubling of atmospheric carbon dioxide.

To explain this finding, the study also showed that while the amount of energy available for convection increases in a warmer and moister climate, the energy inhibiting convection also increases. The relationships of these shifts provide a thermodynamic explanation for increasing or decreasing numbers of storms.

Current climate models do not properly account for cloud processes and have made assumptions about their behavior. In fact, cloud and mesoscale, or medium-scale, processes in the atmosphere are among the biggest uncertainties in today’s climate models, Rasmussen said.

“Now that global climate models are being run at higher resolution, they need more information about the physical processes of clouds, in order to better understand all the ramifications of climate change,” she said. “This was one of the motivations behind the study.”

In Rasmussen’s study, cloud behavior was more realistically defined using data resolved in 4-kilometer blocks. That meant she could resolve topographical features like the Rocky Mountains and allow the thunderstorms to develop naturally in their environment. Her study accounted for propagation of organized storms, and also included correct daily precipitation cycles across the U.S., neither of which are accurately represented in current climate models.

NCAR plans more climate simulations that include even finer-scale detail of weather processes. Rasmussen hopes to conduct follow-up studies that account for shifts in the storm track, which was not reflected in her most recent study. 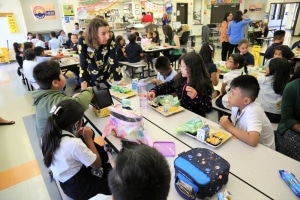 BROOMFIELD, Colo.  – This week, children across the state celebrated Colorado School Meal Day on Tuesday, Sept. 20. Hosted annually by the Colorado Departments of Agriculture and Education, the  day celebrates Colorado agriculture and educates K-12 school children about healthy eating – and about where their food comes from. More than 105,000 students statewide participated and […]