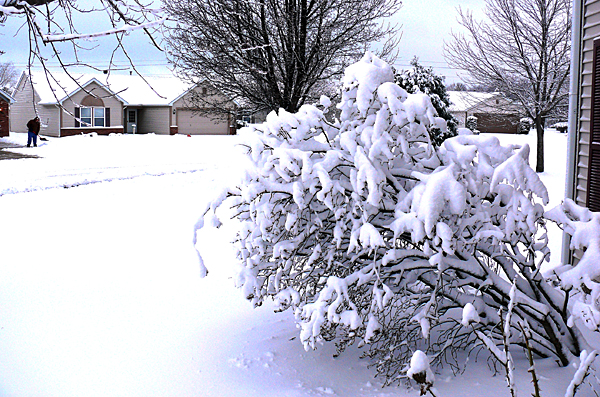 For the past four decades, Ohio’s winters have been warming twice as fast as its summers. And the state is getting more rainfall as well. 2019 was the sixth wettest year in Ohio and the 12th warmest, said Aaron Wilson, climate specialist for The Ohio State University College of Food, Agricultural, and Environmental Sciences (CFAES). (Purdue Agricultural Communication file photo/Keith Robinson)

For the past four decades, Ohio’s winters have been warming twice as fast as its summers. And the state is getting more rainfall as well. 2019 was the sixth wettest year in Ohio and the 12th warmest, said Aaron Wilson, climate specialist for The Ohio State University College of Food, Agricultural, and Environmental Sciences (CFAES).

“It was certainly our wettest decade on record,” Wilson said.

On average, Ohio’s annual rainfall has increased 5%–15% since the early 1900s, with the largest increases in areas such as north-central Ohio where fall rainfall has risen by 31%, Wilson said.

So far, this winter is proving to be warmer than average. December was Ohio’s 15th warmest on record and January, too, is fairly mild, Wilson said. Despite the recent cold bite, average temperatures in January across Ohio are between 8 degrees and 12 degrees Fahrenheit balmier than average for the month.

Jan. 11 was an unusually temperate winter day. In Columbus, the high was 71 degrees; the average high for that day is 36 degrees.

Ohio’s warming is not much different from the worldwide trend. 2019 was the second hottest year ever, according to a report released Jan. 15 from the National Oceanic and Atmospheric Administration.

Across the Midwest, this spring is expected to be warmer—mostly in May and June—and wetter than average, Wilson said. How wet? It’s unclear.

Rainfall this spring could hamper planting again, he said.

“Just because it happens one year does not mean it’s going to happen the same, the following year,” Wilson said, referring to last spring’s record rainfall, the highest ever, which delayed and prevented planting and led to significant drops in corn and soybean yields.

“Given the trends we’re seeing, the probability of overall wetter conditions this spring is great, so we need to be prepared.”

Despite the increased precipitation, Ohio still suffers periods of drought as well. By October 2019, 80% of the state was severely dry, and 30% was in moderate drought conditions, Wilson said.

“The rain just shut off,” he said.

September 2019 marked the hottest September on record in Ohio. “So all of a sudden, we were dealing with some drought conditions,” he said.

Even in the face of these weather challenges, farmers can take precautions. To help farmers deal with the impact of climate shifts, CFAES created a farm crisis task force that offers farmers and their families recommendations for solutions to their challenges.

To contend with the rise in rainfall, Wilson recommends having effective underground drainage systems and finding ways to store water during wet periods to use during intense dry periods. Diverting and collecting water needs to be looked at on a regional level, to have the greatest effect, Wilson said.

Planting cover crops on fields instead of leaving them bare for any period can also slow down the flow of water off of a field, prevent erosion, and improve the condition of the soil, he said.

“It’s not that I can tell farmers what the answer is. I’m hoping farmers have conversations on how to build resilience in their communities,” Wilson said. “We can build buffers to these heavy rainfall events and to short-term drought events.”