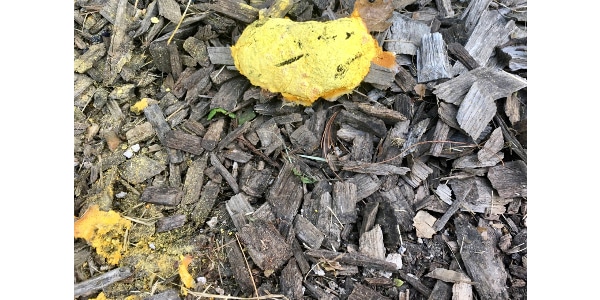 When it first appears, Fuligo septica looks like scrambled eggs. As it dries, it gradually turns brown and takes on an appearance that has prompted the nickname 'dog vomit slime mold.' (Photo by Curt Wohleber, MU Extension)

When the slime mold dries, it turns brown and begins to resemble dog vomit rather than scrambled eggs. In the 1700s, French botanist Jean Marchant referred to it as “fleur de tan” because of the tannish pigment it develops.

Fuligo septica, like all slime molds, is unrelated to fungi. It grows worldwide on rotten wood, plant debris and, most conspicuously, mulch. It produces wind-borne spores that can remain viable for years, waiting for conditions favorable for growth. When it is warm and wet enough, the spores absorb moisture and crack open to release cells that fuse into a plasmodium, a mass of protoplasm containing multiple cell nuclei that aren’t separated by cell walls.

The plasmodium acts like a large amoeba, engulfing its food, which is mostly bacteria. News reports about a large, gooey mass of what might have been plasmodial slime mold is said to have inspired the 1958 science fiction movie “The Blob.”

Folklore has linked Fuligo septica to witches. In Scandinavia, it was said to be the vomit of troll cats, mythical creatures that suck milk from cows and spit it into pails for witches. In Latvia, it has been called “witch’s butter” or “witch’s spit.”

Despite its unflattering nicknames, Fuligo septica does not harm plants, people or animals, Miller says. You can replace mulch where Fuligo septica grows, but it likely will return. The best option is just to enjoy it for the curiosity it is.

Editorial: Prices paid to dairy farmers are a disaster