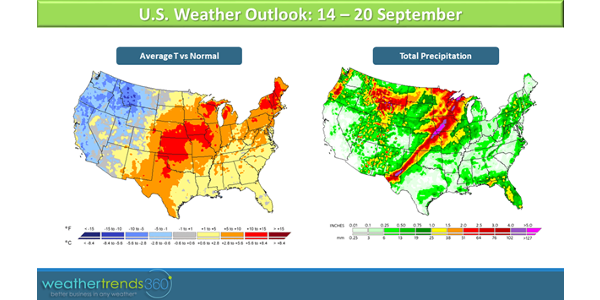 Over the next 7 days (September 14 – 20), temperatures across the Corn Belt are expected to trend warmer to much warmer than normal.

The corn crop in the U.S. is starting to reach maturity and harvest has begun on some of the earlier maturing fields. So far, maturity is behind the pace of both last year and the 5-year average. A generally cooler summer in the eastern Corn Belt and a drier summer in the western Corn Belt could be culprits in the slower than normal maturity. Crops in Illinois and Iowa were 15% and 13% behind their 5-year averages, respectively, when it comes to reaching maturity. For the 18-major corn producing states, overall maturity is currently at 21%, while both last year and the 5-year average are 31%. Harvest is well under way for states such as Texas, Tennessee, and North Carolina and their pace is generally in line with the 5-year average. For the U.S. Corn Belt as a whole, however, harvest is only about 5% complete.

Over the next 7 days (September 14 – 20), temperatures across the Corn Belt are expected to trend warmer to much warmer than normal. A widespread area of the Central U.S. is expected to average 5-10F above normal during this timeframe, while portions of Iowa, Missouri, Nebraska, Kansas, and Oklahoma could see average trends 10-15F above normal. While temperature trends will be rather consistent across the Corn Belt, the same cannot be said for precipitation trends. Through the 20th, rainfall is expected to trend above normal in the Western and Central Corn Belt while much of the Eastern Corn Belt trends drier than normal. The Dakotas are projected to receive some much needed rainfall over the next several days while Minnesota, Iowa, and Wisconsin have the potential for some heavier rains as well, which could help improve drought conditions in Iowa. As we continue heading east, however, 7-day rainfall totals fall off, with Indiana and Ohio receiving below average rains for this time period. Much of Illinois is now categorized as being abnormally dry, with parts of central Illinois experiencing moderate drought.

While Houston and the rest of southeastern Texas continue to recover from the devastation left behind from Hurricane Harvey, the Caribbean, Florida, and the Southeast are beginning recovery efforts following Hurricane Irma. Irma began her path of destruction last week in the Caribbean as a very powerful Category 5 hurricane with sustained winds of 185mph. Moving first across part of the Leeward Islands and the British Virgin Islands, Irma continued along the Caribbean, impacting Puerto Rico, the Bahamas, Hispaniola, and Cuba. Irma made landfall in Cuba late last week as a category 5 hurricane but the landfall aided in Irma weakening to a category 3 hurricane. As Irma left Cuba, she followed a generally northern track toward Florida. Warm waters allowed Irma to once again intensify to a category 4 hurricane before making landfall in the Florida Keys. Irma then continued northward, bringing strong winds, heavy rains, storm surge, and power outages across southern Florida. While the path was generally up the western side of the state, damage was seen across all of southern Florida. Irma weakened as she moved up the state but also brought wind and rain to Georgia and South Carolina. Charleston, SC reported widespread flooding with the third highest storm surge on record for the city. Currently, the Caribbean and Gulf are generally quiet which will allow impacted areas to recover. Hurricane Jose is currently a category 1 hurricane situated between the Bahamas and Bermuda. Jose is currently expected to remain out to sea. A couple tropical waves/disturbances off the western African coast could potentially form into tropical systems but current 2-day potential for formation remains low. We will continue to monitor these disturbances for any future formation.

Temperature trends flip for 2nd half of Sept.