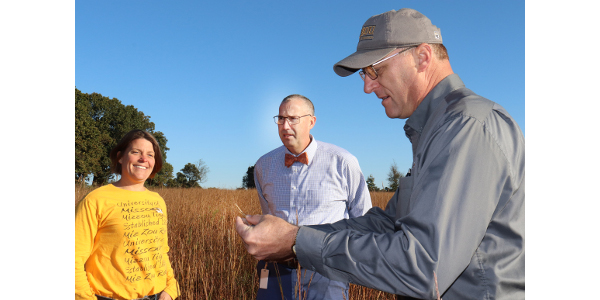 Asbill, the superintendent of the Cassville R-IV School District and a former agriculture teacher, is one of the first participants in the NRCS + MU Grasslands Project. The project is a collaboration between the University of Missouri and the USDA’s Natural Resources Conservation Service.

“The NRCS + MU Grasslands Project provides support for producers to successfully experiment with native grasses on their farms so they and their neighbors can see for themselves how well it works,” Schnakenberg says.

Asbill seeded one of his grazing paddocks to warm-season grasses. His first-year establishment grows tall and lush. “This is what we want to see the first year,” says Schnakenberg.

Its bunch-type growth habit and undergrowth provide cover for quail and other ground-nesting birds. Asbill seeded pasture borders with sunflowers and other plants that attract pollinators. After the growing season, grazing deer find safe haven in the 6-foot-tall grasses.

Asbill chose a mix of 65% Kaw big bluestem, 25% Rumsey Indian grass and 10% Missouri native little bluestem at a seeding rate of 11 pounds per acre. He felt this mix would work well in his existing rotational grazing system. Site conditions and intended use determine the mix and seeding rate, Schnakenberg says.

Preparation is key to getting a good stand, Schnakenberg says. Asbill had to remove the original tall fescue sod before planting to get good seed-to-soil contact and eliminate the fescue competition. He arranged to have the field planted to soybean the year before planting, then used a burndown herbicide mixed with imazapic herbicide for residual weed control ahead of no-till seeding.

Warm-season grasses can be planted as a dormant seeding over the winter or they can be seeded April through June. Spring rains prevented Asbill from planting until late May.

Asbill and other participants found that one of the biggest challenges of planting warm-season grasses is proper drill calibration. Big bluestem, little bluestem and Indian grass seeds are small, light and fluffy. This makes it difficult for them to travel from the seed box and through the seed delivery tube to the soil. He rented a no-till drill adapted for warm-season grass to get the job done correctly. Seeds planted more than ¼ inch deep may not germinate, so he strived to drill as shallow as possible, with some seed even left on top of the ground.

“You can follow the directions on the drill box, but you have to improvise,” Asbill says.

Weed control is a concern in warm-season grass pastures, especially during the establishment year, Schnakenberg says. And this was a year when weeds flourished.

To control broadleaf and other grasses, Asbill applied an imazapic herbicide later in the season. He used Panoramic, a generic version of Plateau.

With the in-season imazapic spray, he used methylated seed oil (MSO) as surfactant in July to improve chemical activity. He found that careful attention to MSO application rates is imperative.

Augmenting grazing systems to include warm-season grasses may allow 300 days or more of grazing, says Schnakenberg. This reduces expenses of buying forage and feed, and protects against drought and hay shortages.

In spring, Asbill will divide the large paddock into several smaller ones to get even better use out of it. Schnakenberg recommends that cattle not graze on the first-year stand. This allows roots to establish without grazing pressure.

The initial investment to convert to warm-season grasses scares some producers, Schnakenberg says. “The sticker shock is hard.” But the long-term cost of production is lower. He recommends that producers convert in small increments and gradually learn how to best establish and maintain the crop before planting large acreages. Warm-season grasses require a new set of management techniques compared to fescue management.

Initial costs are offset by lower nutrient needs, longer grazing seasons and less reliance on more costly hay and feed. Producers can also expect to have another tool for offsetting the effects of endophyte toxins.

One of the perks of growing native grasses is that they require much less fertilizer and lime than most other forage options. This might be due to a more extensive root system that develops over time, says Schnakenberg.

Asbill plans to replace cows and calves and looks forward to an abundant, diverse supply of forage. He would like to demonstrate to production farmers the benefits of management plans that incorporate conservation and native-grass grazing options.

Asbill has lived on his farm for 17 years. “I have a love and passion for agriculture,” he says.

The Center for Native Grasslands Management has compiled a list of publications at nativegrasses.utk.edu/publications.