Home / Indiana / Warm germ testing results are mixed bag
A new user experience is coming! We'll be asking you to login to your Morning Ag Clips account March 1st to access these new features.
We can't wait to share them with you! Read more here. 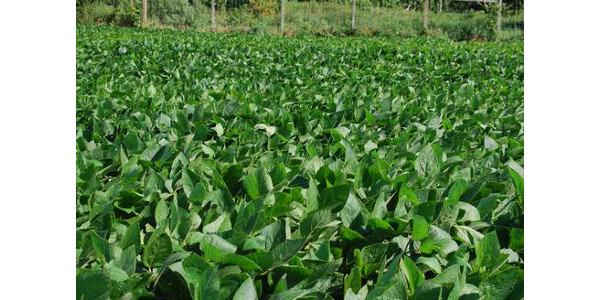 Unprecedented amounts of rain prevented planting last spring and the no-return policies of most seed companies meant farmers had carry-over beans.  Add in that the starting quality of beans was lower than usual due to a rough 2018 that included high disease levels across the Corn Belt, plus the fact that high oil content of soybeans makes the vigor and germination degrade more rapidly in storage, and a big farming challenge is created. (Photo by Michigan State University Extension)

JEFFERSONVILLE, Ohio — When Seed Genetics Direct, a family-owned seed company in Jeffersonville, Ohio, began offering free carry-over bean germination testing to farmers, they weren’t sure what to expect.  What they got was a mixed bag of results, the worst of which are very, very bad.

“So far, we have tested 22 seed samples across Indiana and Ohio through Indiana Crop Improvement,” said Chris Jeffries, CCA, president of Seed Genetics Direct.  “The germ from the tags of all seed samples was 80 or above, with an average of 86.  After testing, only 12 came back with at least 70 percent germ; only five were above 80. The lowest two were in the 30s. That’s a pretty wide spread and very worrisome.”

Although SGD isn’t releasing identities out of respect to farmers and competitors, farmers submitted seed from six different seed companies for testing.  Farmers did not submit Seed Genetics Direct seed for testing because the company moved beans for 95 percent of customers and is standing behind replant guarantees for any farmers who have SGD beans.

According to test results, the largest change in germination from the tag label to the recent germ test was a 67 percent decrease; the smallest was a decrease of six percent.

Five seed samples were the same seed variety from different farmers. Among those, seed germs came back at various percentages, with the largest gap amongst the same seed being a 22 percent difference.

“What this means is that it is very advisable to test any carry-over beans.  Know what you are planting so you can adjust seed rates,” urged Jeffries.  “Don’t go by the germ your neighbor or friend has, even if it is the same variety and brand, because the elements in their barn or warehouse may be different from yours.  You don’t want a seed germination in the 50s, 40s or 30s and not know. You won’t get the yield you thought you would get, and it will be too late to do anything about it. It’s not worth the gamble.”

To help out, SGD is extending their free germ testing program for all farmers until April 14.

Seed Genetics Direct began offering free warm germination testing because unprecedented amounts of rain prevented planting last spring and the no-return policies of most seed companies meant farmers had carry-over beans.  Add in that the starting quality of beans was lower than usual due to a rough 2018 that included high disease levels across the Corn Belt, plus the fact that high oil content of soybeans makes the vigor and germination degrade more rapidly in storage, and a big farming challenge is created.

“Germ rates drop in barns or warehouses with no climate control.  Beans need ideal storage conditions which can be hard to replicate without cold storage,” said Jeffries.

Ethan Conn, SGD soybean production lead, offered advice to those who are trying to meet the challenge.

“Germ rates in the 70s could still be planted, just thicker, or blended with new, higher-quality beans of the same relative maturity,” said Conn.  “Lower than 60 percent may not be worth your time. You need to have a replant strategy.”

SGD is working with farmers to suggest planting rates, as well as offering both 50 percent and 100 percent replant programs.

Those interested in the free germ testing program should send their name, contact information and two-and-a-half pounds of their seed with tags by April 14 to SGD at 9983 Jeffersonville-West Lancaster Road, PO Box 32, Jeffersonville, Ohio, 43128.  SGD will work with Indiana Crop Improvement to test the seed germ.

“We plant a number of replicated research and strip plots across Indiana and Ohio,” said Jeffries.  “Just like our customers, we dealt with a late, wet season that created massive planting delays, followed by heat and dryness at critical stages.  We know what they are up against.  We just want to help.

Questions can be directed to Jeffries at 740-505-0073 or chrisj@seedgeneticsdirect.com.