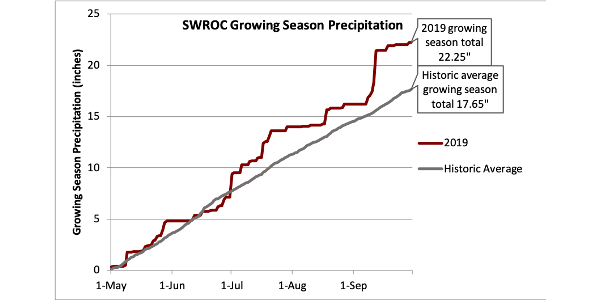 LAMBERTON, Minn. — The University of Minnesota Southwest Research and Outreach Center (SWROC) near Lamberton recorded 22.52″ of precipitation during the 2019 growing season (May 1-Sept. 30). This marks the sixth consecutive growing season with above-average precipitation in southwest Minnesota.

SWROC IPM Specialist Bruce Potter says, “The warm weather the past few weeks of September was a great help in finishing the late-planted corn and soybeans.” This warm end to the growing season helped increase the 2019 growing degree day (GDD) total to 2450, just behind the historic average GDD of 2540.

Potter advises farmers to watch for Palmer amaranth, soybean gall midge, weed and other issues during harvest and reports that soybean harvest is about one week behind normal. “Farmers should expect average yields in earlier planted soybeans. Wet spots and perhaps uncontrolled late-season soybean aphids have hurt yield in some fields. Septoria brown spot and brown stem rot are two diseases that are prevalent this season.”

Potter also anticipates that grain driers will get a workout this fall. “Expect early- to mid-May planted corn to yield quite well but be a light in test weight. Yields will drop off progressively with planting date for corn planted after mid-May and these fields will also likely be higher in moisture with possible test weight issues.”

Corn growers should watch stalk quality as the fall progresses. Potter says, “Nitrogen/water issues and several diseases such as Anthracnose and in some cases Phomopsis may reduce standability and some fields may need to harvested at higher moistures. In addition, there are issues with brittle ear shanks in some fields that should be watched.”

Tar spot of corn found for the first time in Minn.