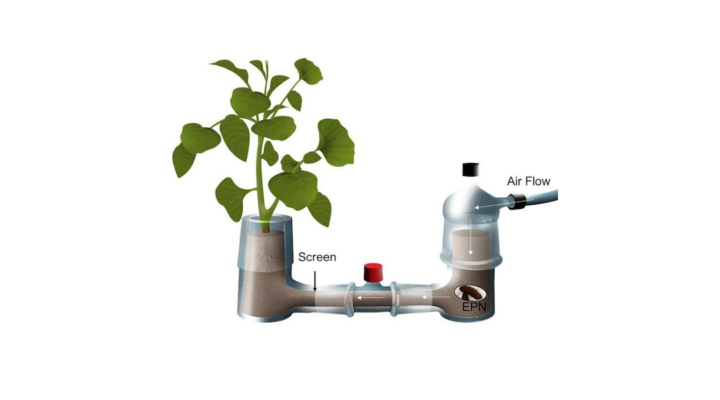 Entomologists from Texas A&M University, including Dr. Anjel Helms, who led the study, and Penn State University took a look at whether Colorado potato beetles and potato plants responded to the presence of entomopathogenic nematodes, EPNs, or insect-killing nematodes.

The study, “Chemical cues linked to risk: cues from below-ground natural enemies enhance plant defenses and influence herbivore behavior and performance,” focused on how organisms communicate using signals and cues, specifically how organisms eavesdrop on each other as part of their survival strategies, said Helms.

“For this study, we wanted to flip things around and determine whether plants and insect herbivores can eavesdrop on chemical cues produced by a predator,” she said.

Throughout the study, Helms found that these insect-killing nematodes do produce distinctive chemical cues that both the plant and insect herbivores respond to. While the female Colorado potato beetles laid fewer eggs when the cues were present, the potato plant also increased its defenses.

This was especially important since the Colorado potato beetle is notorious for developing insecticide resistance, making them an especially devastating pest, she said.

“Although Colorado potato beetles feed above ground on plant leaves, they are susceptible to EPNs at all life stages,” she said.

While a beetle is not likely to come in contact with EPNs during most stages of life, it is most susceptible to EPNs while on the ground moving from plant to plant, or when entering the soil to pupate and emerge as an adult beetle.

The study also found that growers can experience additional benefits from using EPNs for biological control of insect pests.

“Not only are the EPNs directly killing insect pests in the soil, they also produce chemical cues that provide additional protection to plants,” Helms said. “They deter herbivores and enhance plant resistance to pests.”