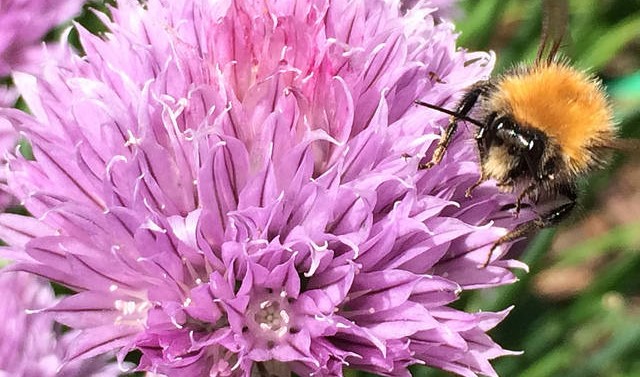 "It is mostly the abundant nectar that brings the bees in," said Francis Drummond, a professor of insect ecology and insect pest management at the University of Maine. "Some of the more attractive herbs to bees are thyme, comfrey, borage, oregano, bee's friend, lemon balm, rosemary, hyssop, sage, lavender and chives." (Dark Dwarf, Flickr/Creative Commons)

WASHINGTON — Herbs are among the most useful plants in nature. They can tantalize the taste buds, help cure what ails you, oil the body, perfume the air, and attract bees, butterflies and hummingbirds.

“People are getting more into herbs, with herb sales definitely on the rise,” said David Trinklein, an Extension horticulturist with the University of Missouri. “They’re using fresh herbs from the garden for culinary purposes, but another important reason is to help pollinators.”

Many gardeners are trying to help declining pollinator populations by providing them with the plants they need to thrive.

Herbs appeal to a great variety of bee species, said Francis Drummond, a professor of insect ecology and insect pest management at the University of Maine.

“It is mostly the abundant nectar that brings the bees in,” he said. “Some of the more attractive herbs to bees are thyme, comfrey, borage, oregano, bee’s friend, lemon balm, rosemary, hyssop, sage, lavender and chives.”

Most flowering herbs are attractive to pollinators, but some, like cilantro and basil, tend to lose other qualities when they blossom or bolt, said Ed Spevak, curator of invertebrates at the St. Louis Zoo. “So use the leaves earlier (for your own purposes) but then allow the plant to flower to support pollinators,” he said.

Bees find flowers by way of their color, not their scent, said David Salman, founder and chief horticulturist for High Country Gardens. “Particularly honeybees, although some native bees will feed on them as well,” he said. “But herbs primarily have Old World origins, so their primary interest is (for) honeybees which also were imported here.

Pollinators as a whole are necessary for a huge amount of the world’s food production, but the European honeybee is a critical species, Trinklein said.

Bees need to collect syrup and pollen from early spring through late fall to support a healthy hive, Trinklein said. That means gardeners should plant a variety of flowers and herbs to prolong the bloom season.

Many beekeepers maintain that the herbs used for attracting pollinators should be natives, but Trinklein disagrees.

“I don’t think a bee minds if an herb is native or non-native,” he said. “Lavender and anything in the catnip family are particularly attractive to bees.”

Gardeners seeking to support pollinators might consider planting scent gardens made up entirely of herbs. They would provide pleasing fragrances around the home as well as nutrition for the bees, he said.

“However, it is advisable to avoid (wearing) strong-smelling perfumes, hairsprays or other fragrances which might attract to the gardener confused bees seeking out nectar,” Trinklein said.

A call for certainty of ag biotech in China talks