Home » Want to explore the wide variety of California wines? 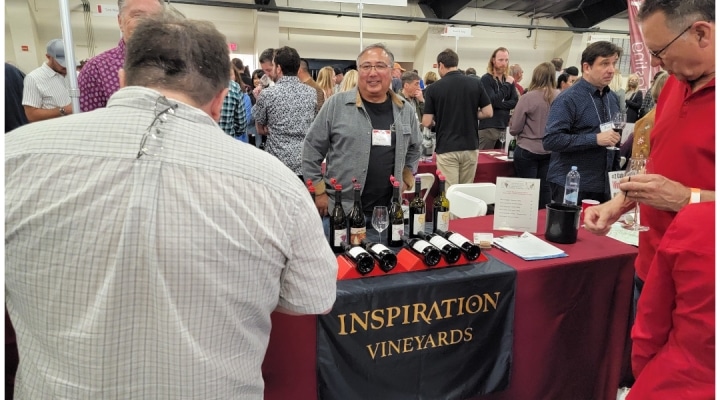 Photo courtesy of the Family Winemakers of California, taken at the Del Mar Fairgrounds tasting event in March.

OAKLAND, Calif. — When you’re a small, family-owned winery without a large advertising budget, the best way to spread the word about the quality of your wines is to have key influencers taste them. But since the 300 members of the Family Winemakers of California are located from Eureka to San Diego and many points in between, it can be difficult to get these influencers to come to you.

Which is why the trade association holds two large tastings each year, one at the Del Mar Fairgrounds in San Diego County in the spring and one in the Bay Area in the summer. This year, the Bay Area event will be held on Sunday, August 21, at BLOC15 in Jack London Square in Oakland – the first time a Bay Area tasting will be held outside of San Francisco.

A total of 52 producers who sell fewer than 5,000 cases a year will be pouring more than 350 different wines at the event, which is expected to draw about 250 people from the wine trade – retailers and writers for trade publications – and another 150 or so discerning consumers.

“We host two events to connect small producers with the wine trade they wouldn’t normally have an opportunity to formulate a relationship with,” said Kathy Spallas, the association’s vice president of administration. “A lot of tastings are like a festival, but ours is just a wine tasting. It’s about meeting the winemaker and the winery owner and allowing them to learn what they want to learn about the wines.

Farm Credit has been a sponsor of the events for many years, which Spallas said “means the world to us.” Mark Littlefield, President and CEO of Farm Credit West, said Farm Credit was proud to help showcase wines from smaller producers, especially after the disruptions caused by COVID-19.

“The pandemic has been very difficult for many small producers in the wine industry, as many were selling their wines only to restaurants or relied on visitors to their tasting rooms for wine sales,” Littlefield said.  “These wineries are eager to get back to pouring their fabulous wines for consumers and especially for the trade accounts that are back in business and ready to restock their wine lists.”

Besides helping member companies market their wines, the association also is a strong advocate for family-owned wineries at the state Capitol. Besides the labor and regulatory issues affecting most businesses, the biggest issue affecting smaller wineries is their ability to sell directly to consumers – the main reason the association was formed in 1990.

“We’ve spent more than 30 years working to loosen up the post-Prohibition restrictions in California law and broaden access to domestic markets,” Spallas said. “We’ve pursued legislation for many years to create numerous sales channels that now allow wine to be sold at certified farmers’ markets, at fairs and festivals and through order-taking at non-profit wine tasting events.”

Spallas noted that small wineries that market directly to consumers fared better during the pandemic than their counterparts that focused on relationships with restaurants and retailers because of the decline in eating out.

Doors will open for the Oakland Tasting at noon for specially ticketed consumers and at 2 p.m. for the general consumer. The event ends at 4 p.m. Consumer tickets are on sale now https://familywinemakers.org/taste (click on the Consumer button) for $55. Early admission tickets are $75. The cost at the door will be $60 and $80. Orders can be placed that day for wines you like for shipment to your home, and many wineries will be offering special prices.