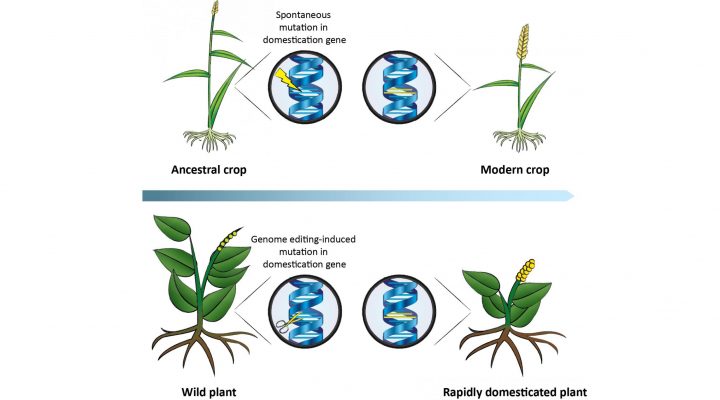 This figure shows how during the domestication of ancestral crops, plants carrying spontaneous mutations in domestication genes were selected for. The same genes can be targeted in wild plants by genome editing, resulting in a rapidly domesticated plant. (Palmgren et al./Trends in Plant Science 2017)

WASHINGTON — Out of the more than 300,000 plant species in existence, only three species–rice, wheat, and maize–account for most of the plant matter that humans consume, partly because in the history of agriculture, mutations arose that made these crops the easiest to harvest. But with CRISPR technology, we don’t have to wait for nature to help us domesticate plants, argue researchers at the University of Copenhagen. In a Review published March 2 in Trends in Plant Science, they describe how gene editing could make, for example, wild legumes, quinoa, or amaranth, which are already sustainable and nutritious, more farmable.

“In theory, you can now take those traits that have been selected for over thousands of years of crop domestication–such as reduced bitterness and those that facilitate easy harvest–and induce those mutations in plants that have never been cultivated,” says senior author Michael Palmgren, a botanist who heads an interdisciplinary think tank called “Plants for a Changing World” at the University of Copenhagen.

“All of the plants we eat today are mutants, but the crops we have now were selected for over thousands of years, and their mutations arose by chance,” says Palmgren, a professor in the University of Copenhagen’s Department of Plant and Environmental Sciences. “With gene editing, we can create ‘biologically inspired organisms’ in that we don’t want to improve nature, we want to benefit from what nature has already created.”

This strategy also has potential to address problems related to pesticide use and the impact of large-scale agriculture on the environment. For example, runoff from excess nitrogen in fertilizers is a common pollutant; however, wild legumes, through symbiosis with bacteria, can turn nitrogen available in the atmosphere into their own fertilizer. “Why not try to domesticate more of these plants?” Palmgren says.

Accelerating domestication could face similar ethical, economic, and legal issues that arise whenever the gene editing of crops is involved. However, public opinion may differ somewhat because this approach doesn’t involve taking a gene from another organism but rather deleting existing genes. For farmers and breeders, adding underutilized species of plants may not be immediately attractive because there is less of a demand, and so work on building consumer’s appetite for them will be necessary. However, the public good of making such a switch could in the end be a selling point.

Palmgren’s group, which aims to evaluate new directions for agriculture, published a related paper two years ago on using gene editing to make domesticated plants more “wild” and thus hardier for organic farmers (doi: 10.1016/j.tplants.2015.04.011). They hope that as agriculture evolves to meet increasing demand, they can help prepare the public and policymakers for the implementation of genome editing into our food supply.