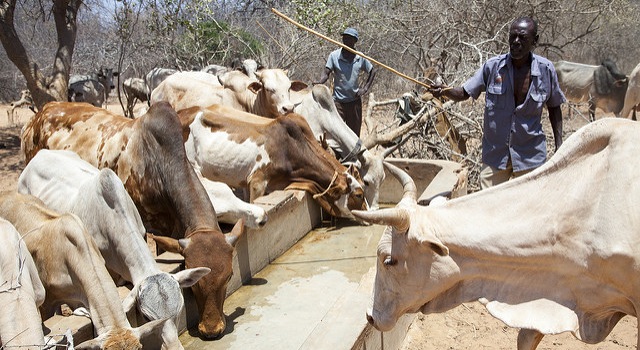 Kenya's military and police have been working for a month to disarm and drive the hundreds of herders and their animals out of ranches they've invaded, but their actions appear to have escalated the violence. (Clare McEvoy/Trocaire; Flickr/Creative Commons)

NAIROBI, Kenya (AP) — Herders and large-scale farmers in parts of Kenya’s Rift Valley are desperately waiting for seasonal rains to ease the prolonged drought and the current conflict over grazing land in which more than 30 people have died.

Kenya’s military and police have been working for a month to disarm and drive the hundreds of herders and their animals out of ranches they’ve invaded, but their actions appear to have escalated the violence.

The Laikipia Farmers Association says when the military and police drive nomadic herders from one sprawling ranch they move into another ranch.

Politicians campaigning for positions in the August elections are inciting the herders to invade the ranches saying that it is their ancestral land, Martin Evans, the ranchers’ association chairman said Monday.

“They are telling the people ‘the land is yours, take it,'” Evans said.

The invasions started late last year and the violence has increased with attempts to evict the herders from the Pokot, Maasai and Samburu communities. Last month British national and ranch owner Tristan Voorspuy was killed when he went to inspect damage done by the herders on one of his lodges. Lodges belonging to famed conservationist and author Italian-born Kuki Gallman were also burned by the herders. Gallman is known for her bestselling book “I Dreamed of Africa,” which became a movie by the same title starring Kim Bassinger.

The ranches, some of which double up as conservancies, were acquired in the 1990s and prevented local groups from being able to graze their cattle, said land expert Odenda Lumumba. More than half of the land available for farming in Laikipia, is private farmland, according to government statistics.

“Laikipia region has transformed from a basic pastoralist economy to a large-scale farming-touristic economy and ecology, but the people who preexisted in this space remained the same. These two do not exist in the same plane. All land users should be … assimilated into that economy to co-exist,” Lumumba said. The majority of the herding communities, who occupy the northern part of the country, have long been marginalized and do not have access to school, health facilities and security, he said.

Due to the lack of police deployment in their regions herders armed themselves with rifles from war-torn neighboring countries to protect themselves against rivals carrying out cattle raids, he said. The acquisition of rifles by the herders has made the cattle raids deadlier and recent attempts to disarm the herders have not succeeded in reducing the violence.

Where security measures have failed, seasonal rain may help.

Nearly half of the country has been affected by the drought which has been declared a national disaster, but Kenya’s Metrological Department forecasts rain over most parts of the country this month. The rains should bring new grass and reduce the pressure for grazing land.

Henry Bailey, a land use consultant who has worked in Kenya for more than a decade, says the problem is that there is no sustainable use of grass in the areas the pastoralists occupy.

“If those areas are rehabilitated then it would provide a basis of a vibrant pastoralist economy,” he said. The government should help with the rehabilitation of the grass and create markets for the pastoralists to create a competitive business for their livestock, he said.

“When you provide business opportunities for people they are less interested to go out and commit a crime because they have a vested interest in the development,” he said.

Canadian envoy fires back over dairy