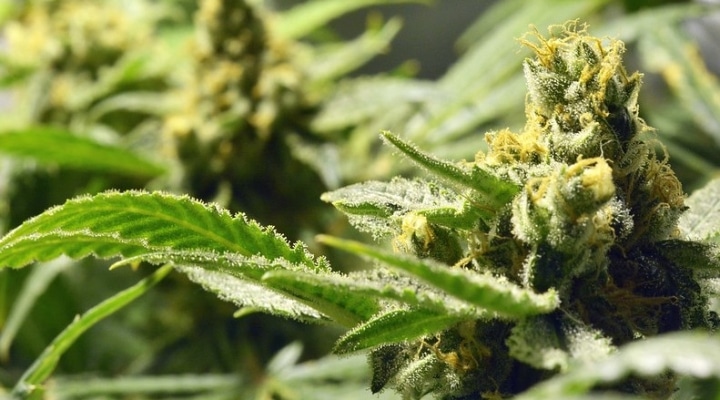 Current Vermont law that went into effect in 2018 allows for the possession of small amounts of marijuana for recreational use, but it does not include a mechanism to tax and sell marijuana. (Don Goofy, Flickr/Creative Commons)

MONTPELIER (AP) — The Vermont House on Wednesday advanced a bill to tax and regulate marijuana sales in the state, after the Senate passed legislation last spring.

Current Vermont law that went into effect in 2018 allows for the possession of small amounts of marijuana for recreational use, but it does not include a mechanism to tax and sell marijuana. The House vote on the tax-and-regulate legislation late Wednesday was approved 90-54. The bill will be considered for a third reading on Thursday.

Rep. John Gannon, a Democrat from Wilmington, called Vermont’s existing law “awkward” because it legalized recreational pot but did not create “safe and legal access to it.” He told lawmakers that the question before them was whether cannabis, which was already legalized in Vermont, should be regulated.

“The goal of this bill is the elimination or near elimination of the black market, delivery of product of a certified purity and known potency while minimizing the growth of heavy or hazardous use and use by children,” Gannon said.

A House amendment has proposed a 14% excise tax on retail sales of marijuana products and a 6% sales and use tax for a total rate of 20%. The bill establishes a license for current medical dispensaries to start selling marijuana in February of 2022. Other retailers would need to apply for licenses and could start selling it in July of 2022. Cultivators, wholesalers and product manufacturers would need to apply for other licenses available.

The program for licensed cannabis establishments would be administered by an independent Cannabis Control Board within the executive branch, which would be responsible for establishing rules, compliance and enforcement.

The use of cannabis in public places would be prohibited unless specifically authorized by law.

Vermont’s Republican Gov. Phil Scott has said he was concerned about highway safety, and said he wanted to see an effective way to test for impairment.

The bill includes use of a saliva test to test drivers suspected of being impaired by a drug or a combination of alcohol and a drug. Scott spokeswoman Rebecca Kelley did not immediately return an email Wednesday seeking comment about the current legislation.

The Vermont Growers Association, which describes itself as Vermont’s cannabis professional working to create the best legal cannabis industry in the state, opposes the legislation, saying it “prioritizes out-of-state cannabis corporations over Vermont’s family farms and small businesses,” according to its website.