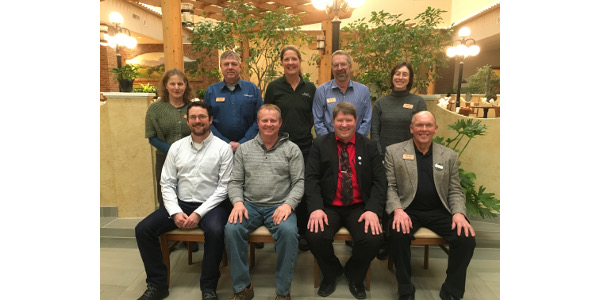 Von Ruden is a lifelong Farmers Union member, and since 2007 has served as the organization’s District 5 director, representing Crawford, Grant, Green, Iowa, Lafayette, Richland, Rock, and Vernon counties. He also leads the WFU Foundation Board of Directors, serves on the National Farmers Union Board and is chairman of the NFU Membership Committee. Darin and his wife, Joann, live in Westby. The Von Ruden family recently transitioned the farm to the fourth generation, when their son Brett purchased the machinery and 50-cow dairy herd.

Von Ruden has been active with Farmers Union at the local, state and national levels. He is a seven-time recipient of the Silver Star Award, which is National Farmers Union’s highest recognition of membership development. A patron member of the Westby Cooperative Creamery, he was also a founding member of Wisconsin Farmers Union Specialty Cheese, chairman of the Wisconsin Dairy Farmers Guild and a founding member of the Upper Midwest Milk Producers Association. In recent years, he has represented U.S. farmers as a delegate at World Farmers’ Organisation events. He also presently serves on the Dairy Task Force 2.0.

Von Ruden is the 11th president in WFU’s 88-year history. He divides his time traveling between the WFU state office in Chippewa Falls and its legislative office in Madison.

In his presidential address, Von Ruden highlighted how people from many backgrounds, regardless of farm size, organization affiliation, or individual background, have pulled together around the need for dairy pricing reform, nonpartisan redistricting, antitrust enforcement in agricultural sectors, and other key topics.

“Crisis can be a catalyst for change – that was especially true in 2018,” Von Ruden said. “This past year has been a year of organizing that has united folks around the many issues impacting our food systems and farmers’ livelihoods.”

Von Ruden noted that the plight of the family farmer has not been limited to the United States. “We’re seeing commonalities in many of these issues, which are being faced by farmers worldwide. At the heart of farmers’ struggles are outdated pricing systems that are not keeping up with the cost of inputs, growing consolidation and corporate investment in agriculture, and increasing water quality and climate change concerns.”

“Now more than ever, rural Wisconsin needs people who are willing to step up, and in recent months, many of these folks have been Farmers Union members,” Von Ruden said. “Farmers Union has been and will continue to be a bridge builder as we work toward a new era for family farms. We can no longer accept the status quo.”

Von Ruden noted the organization has seen strong growth, with three new chapters forming in 2018, including the Ashland-Bayfield Farmers Union in northern Wisconsin and Lake to Bay and Outagamie-Winnebago chapters in eastern Wisconsin. Mary Dougherty of the Ashland-Bayfield chapter will receive National Farmers Union’s highest membership recruitment award, the Silver Star, at the NFU Convention March 3-5 in Bellevue, Washington.

WFU board members re-elected
Also re-elected to the WFU board were Ed Gorell of Eleva and Rick Adamski of Seymour.

Gorell serves as District 3 Director, representing Chippewa, Clark, and Eau Claire counties. Starting in 1983, Gorell and his wife, Kristi, raised feeder steers and broiler birds on their Eleva farm. Last year, the Gorells sold their remaining inventory of feeder steers and Ed became a part-time driver for Myren Trucking out of Cleghorn, collecting milk on farms across western Wisconsin. Gorell has received Farmers Union awards for membership and chapter building. He is chairman of the membership committee and serves on the election and building/grounds committees. He attends National Farmers Union conventions and fly-ins to Washington D.C. and is president of the Eau Claire County Farmers Union.

Caleb Langworthy of Wheeler and Kriss Marion of Blanchardville were elected as the delegates who will represent WFU at the National Farmers Union Convention March 3-5 in Bellevue, Washington.