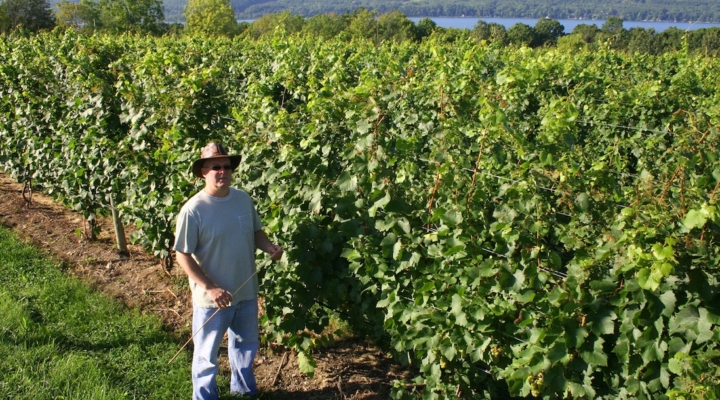 OSSINING, N.Y. — The Eastern New York Commercial Horticulture Program of Cornell Cooperative Extension has announced the hiring of James Meyers as the new viticulture and wine specialist for a 17-county region in the eastern part of New York State. Meyers will provide regional grape growers with a combination of on-the-ground grape production assistance and some high flying technology.

Meyers earned his PhD in Viticulture at Cornell University and has applied a Masters degree in Computer Science from Brown University to his viticultural research. Using satellite imaging and drone technology, Meyers has mapped canopy and vineyard variability to help growers in the Finger Lakes region of New York and in the state of California optimize the efficiency and profitability of their vineyard operations. He will continue the use of that technology in eastern New York.

‘Images taken by a drone-mounted camera can be used to identify areas of inconsistency in a vineyard and create variability maps to guide ground level assessments of vine performance for potential remediation such as soil amendments, canopy management activities, or rootstock changes,’ Meyers explained. ‘This technology can also be used to add harvesting and processing efficiency.’

His hiring is timely for the 300-mile eastern NY region that experienced a 34 percent increase in the number of grape-growing operations and a 50 percent increase in grape acres from 2007 to 2012, according to the October 2016 Grape Production in the Eastern New York Commercial Horticulture Region report issued by the Cornell Cooperative Extension ENYCHP.

To contact Meyers or any of the other 12 specialists advising commercial fruit and vegetable growers in eastern NY, and to find educational resources, newsletters and pest alerts, visit the website at https://enych.cce.cornell.edu.

According to the October 2016 Grape Production in the Eastern New York Commercial Horticulture Region report issued by the Cornell Cooperative Extension ENYCHP: