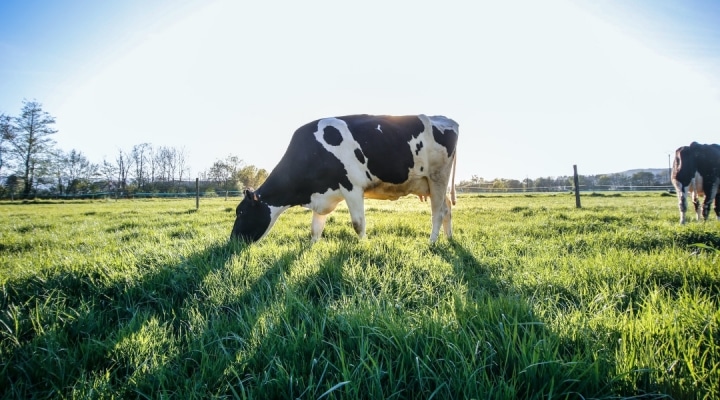 The researchers found that cows supplemented with vitamin D in the form of calcidiol had increased expression of genes that encode for proteins needed for cell adhesion and migration, cell-to-cell communication, pathogen recognition, and pathogen killing compared with those given cholecalciferol. Such changes might enhance the ability of the innate immune system to fend off infections in early lactation. (Photo by Flash Dantz on Unsplash)

PHILADELPHIA — Known as a crucial component in the body’s ability to absorb and retain calcium, essential to processes such as the development and maintenance of healthy bones, vitamin D has also been found to play important roles in immune defense. A new study in the October issue of the Journal of Dairy Science® explores the effects of different sources and amounts of vitamin D in dairy cows, revealing promising possibilities for improvements to health and welfare.

This study by scientists from the University of Florida, Gainesville (USA), focused on pregnant dairy cows, as pregnancy and lactation increase calcium demands, which might affect calcium reserves of the dam, and such dynamic changes occur when cows are most vulnerable to disease. Thus, it is not surprising that vitamin D could be especially important at this time. “Vitamin D status might contribute to the ability of the immune response to confer resistance to bacterial infections,” states senior author José Eduardo P. Santos, PhD.

In dairy cows, as in humans, vitamin D can be created by the body when skin is exposed to sunlight, or it can be absorbed from dietary sources. Researchers in this study examined dietary supplementation of two different forms of vitamin D, cholecalciferol or calcidiol, at either one or three milligrams above the amount provided in a standard dairy cow diet that contained 0.02 mg of cholecalciferol per kilogram of dry matter. Cholecalciferol is the form of vitamin D typically supplemented in cows’ diets, but Santos notes that the less used form, calcidiol, is one step ahead in the activation of vitamin D and has the potential benefit of maintaining adequate status with smaller daily dietary amounts.

Repeated blood sampling allowed the team to compare circulating concentrations of vitamin D metabolites, minerals and metabolites in blood, and concentrations and activity of white blood cells, which are essential in the body’s ability to respond to infections, such as bacterial invaders that often cause uterine and mammary diseases in cattle. The team also extracted DNA from white blood cells to quantify the expression of several genes related to immune function.

The researchers found that cows supplemented with vitamin D in the form of calcidiol had increased expression of genes that encode for proteins needed for cell adhesion and migration, cell-to-cell communication, pathogen recognition, and pathogen killing compared with those given cholecalciferol. Such changes might enhance the ability of the innate immune system to fend off infections in early lactation.

Santos and colleagues state that, although not conclusive, “The changes observed in this experiment suggest that providing vitamin D beyond the amounts needed to prevent perceived deficiency, in particular by supplementation with calcidiol, might play a role in supporting innate immune defenses in dairy cows.”

Previous work by these researchers showed some indication that calcidiol might affect risk of diseases in early lactation (Martinez et al., 2018; https://doi.org/10.3168/jds.2017-13740), but larger experiments are needed to confirm those results. Although further investigation is needed, the results published in this paper suggest the possibility of another dietary intervention to reduce illness among dairy cows at the risky time around the birth of calves, with positive welfare effects for cows and financial benefits for farmers.

Maine potato harvesters having a good year in '21