Home / National / Virginia Tech researchers trace the potato’s origins
A new user experience is coming! We'll be asking you to login to your Morning Ag Clips account March 1st to access these new features.
We can't wait to share them with you! Read more here. 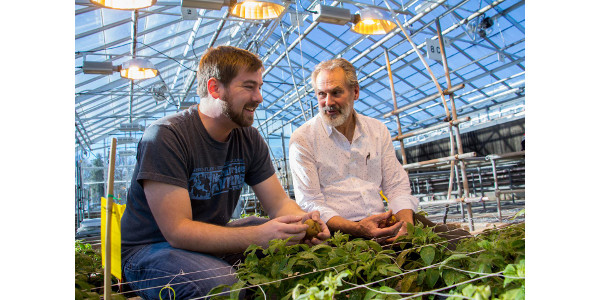 Parker Laimbeer (left) and Richard Veilleux examine specimens in their greenhouse. Laimbeer, an expert in endoreduplication, is working to alter genes in order to control the size of potatoes and to potentially increase yields. (Courtesy of Virginia Tech)

BLACKSBURG, Va. — The comfort food we know and love today as the potato was domesticated between 8,000 and 10,000 years ago from a wild species native to the Andes Mountains in southern Peru. During the 16th century, Spanish conquistadors are believed to have transported the rugged root-like vegetable across the Atlantic.

Now, a team of researchers has charted this lineage in order to learn how the potato was domesticated and how its DNA evolved over time.

“We sequenced the genomes, or the genetic code, of a spectrum of potatoes native to South America — Peru, Bolivia, and Ecuador,” said Richard Veilleux, head of the Department of Horticulture in the Virginia Tech College of Agriculture and Life Sciencesand the Julian and Margaret Gary Professor. “You see a rainbow of potatoes on the continent. How they moved and were domesticated has been debated for many years.”

Veilleux and his graduate student, Parker Laimbeer, a doctoral candidate in horticulture from Rappahannock, Virginia, partnered with colleagues at Michigan State University, including C. Robin Buell, a professor of plant biology, and Michael Hardigan, a former graduate research assistant and now a postdoctoral researcher at the University of California Davis, to conduct a plant genome project in response to a National Science Foundation funding opportunity. Their work was recently published in the Proceedings of the National Academy of Sciences of the United States of America.

“The results increase our understanding of how the potato was domesticated and what genes are important. We also identified potential genes to improve on in the future and showed how high throughput genome sequencing provides new tools,” Veilleux said.

In order to learn more about this crop, the third most important grown for direct human consumption, the team examined wild and cultivated species, including potatoes found in South American markets, domestic North American varieties, and land races, which are cultivated potatoes analogous to heirloom breeds.

Then, using modern genomic approaches, the researchers sought to provide insight into genomic diversity, to reveal historic hybridization events, and to identify genes targeted during domestication that control variance for agricultural traits – all of which are vital to food security.

“What makes potatoes complicated is that they don’t breed true,” said Veilleux. “If you plant seeds, you get less than you started with.”

Another change that accompanied potato domestication is reduced pollen fertility. Whereas wild species must be fertile to disperse seeds, cultivated species grow from tubers. This irrelevance atrophied the species’ fertility, and the effect could be observed at a genomic level.

The Russet Burbank, a mutant of the Burbank potato, was released in the year 1902. To date, this variety remains the most popular in the U.S., underscoring a long-standing lack of advancement in potato breeding.

Yet, efforts to better understand the potato’s genetic makeup have been fraught with challenges, not the least of which is the crop’s habit of maintaining four copies of each gene.

Veilleux and Laimbeer studied copy number variation — multiple copies of genes within the same organism. Through the process of breeding, multiple copies of a DNA sequence are duplicated or deleted not only in potatoes, but in all plant and animal species. When an organism is born, changes as a result of meiosis produce different copies of different parts of the genome. This imperfect process allows for mutations and extra DNA. Extra copies of DNA may be beneficial in some cases, leading to increased genetic variation, and detrimental in others, leading to disease.

“Because of the potato’s genetic complexity, we could not have conducted this research without access to a sequenced potato genome,” said Laimbeer. “The sequenced genome allows us to compare all other potatoes to this blueprint.”

As it happens, Veilleux and Buell were part of the Potato Genome Sequencing Consortium of nearly 100 scientists who sequenced the world’s first potato genome. Sequencing the potato genome, published in 2011, was based on the availability of a “doubled monoploid” potato, referred to as DM, developed in the Veilleux lab. The tuber’s relative genetic simplicity compared to commercial potatoes made it easier to sequence using available next generation sequencing technology. The DM sequence continues to serve as the reference genome for potato.

“We aligned the genomes of each potato we studied to the DM potato,” said Laimbeer. “Now, we can see the picture on the box when putting together each potato genome puzzle. It makes sense.”

The research team’s contributions toward a greater understanding of the tuber’s genetic blueprint may help growers transition to a successful breeding scheme that will produce desirable varieties. The potato chip industry, for instance, is highly selective about what types of potatoes it uses. The ultimate snack specimens require the perfect starch content to produce just the right color and texture when fried. The potatoes must also be the correct shape, with shallow eyes to pass through chipping machines.

Thanks to Veilleux and Laimbeer, it will soon be easier to breed the perfect potato chip or to access desirable traits such as enhanced disease resistance in wild or primitive species. Extant natural populations, they believe, represent an essential source of untapped adaptive potential.

Look out Russet Burbank, there may soon be new varieties competing for top potato.