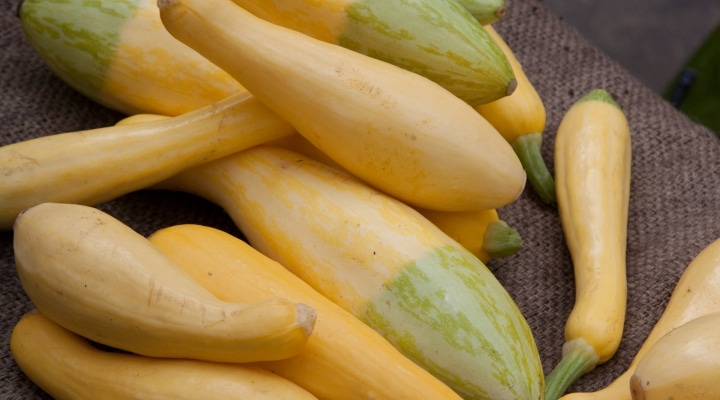 Summer squash is an ancient fruit that is still enjoyed on modern dinner tables, and the summer staple is thriving on farms and in gardens across Virginia despite a late spring frost.(photo by Tim Sackton, Creative Commons/flickr.com)

WINCHESTER, Va. — Summer squash is an ancient fruit that is still enjoyed on modern dinner tables, and the summer staple is thriving on farms and in gardens across Virginia despite a late spring frost.

“We’re lucky to have what we’ve got,” said Marker, a member of the Virginia Farm Bureau Federation Specialty Crops Advisory Committee. “I think between April and May we had a total of six freezes. But I learned a long time ago that I wasn’t the one in charge. I’ll do whatever I can, but ultimately, what happens with the weather is not up to me.”

The three main types of summer squash include the yellow crookneck; the saucer-shaped, scallop-edged pattypan; and the oblong, green or yellow zucchini. Squash is botanically a fruit, but is usually cooked like a vegetable.

“Squash is very productive, and relatively easy to grow,” said Chris Mullins of Virginia Cooperative Extension. “And it’s been around for a long time. In America, it was one of the earliest food sources along with corn and beans. And the fruit will keep producing for a large portion of the summer.”

But don’t let squash get too big before harvest.

“They get hard and aren’t very tasty at that point,” Mullins said.

Summer squash is a versatile crowd pleaser at dinnertime. It’s simple to prepare, low in calories and carbohydrates, and is a source of fiber and potassium. And preparation styles can appeal to all ages and palates.

“Growing up, mom always floured and fried it with a little sprinkle of sugar,” Marker said. “It was really good, but I don’t need the sugar now. A squash casserole is great, but I enjoy grilled squash just as much.”

Marker recommended seeding large squash, cutting them in long strips and putting them on the grill with some olive oil and seasoning. “It takes them no time to cook. They’re good-to-go.”

Pick Virginia peaches at the peak of season
July 23, 2020