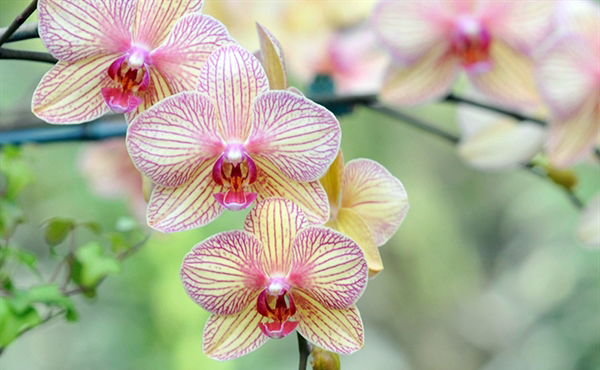 The orchid family has more species than any other plant family in the world. Once rare and costly, orchids have become a mass-market commodity sold in garden centers and big-box and grocery stores. Phalaenopsis, with its elegant, arching sprays of blooms, is the most common potted orchid.

RICHMOND, Va. — Orchids are now the top-selling potted flower in the U.S.

The orchid family has more species than any other plant family in the world. Once rare and costly, orchids have become a mass-market commodity sold in garden centers and big-box and grocery stores. Phalaenopsis, with its elegant, arching sprays of blooms, is the most common potted orchid.

The popularity of orchids has opened the door for Virginia nurseries and greenhouses to branch out into the $288 million orchid industry.

In Virginia, the greenhouse/nursery industry is ranked fifth among the state’s agricultural commodities, with nearly $300 million in cash receipts annually.

“Orchids are a pretty dynamic product,” said Van Wingerden. “There is a good marketing opportunity because of their appeal and different types of products you can create.”

The young entrepreneur, who has seen revenue increase about 25 percent each year, has an ambitious goal for continued business growth. By the end of 2019, he expects Color Orchids to reach annual sales of 2 million orchids out of 35 million nationwide.

While Van Wingerden is driving a high-volume orchid business, Floradise Orchids in Orange County has built a following around personalized service to loyal customers and expert advice on its broad range of orchids produced in limited quantities.

Husband and wife duo Janet Cherchuck and Stephen Shifflett grow hundreds of specimen and heirloom orchids in the company’s 3,000-square-foot greenhouse. Their passion for the flowering gems has fueled nearly 40 years in the orchid business.

“We were lucky to inherit a very prominent collection from a big orchid collector that formed the basis of our stock,” Cherchuck said. “We’ve had some plants in our collection for 35 to 40 years and sell divisions of that private stock.”

One plant in Floradise’s collection, a lovely lady slipper, dates to 1869. Offshoots of that beauty have been blooming for more than 150 years.

Today, Floradise trades mostly in direct sales from its greenhouse or markets in the Washington metropolitan area. The service of creating custom arrangements in unique containers also is flourishing.

“More and more of our business is contract delivery. We provide orchid arrangements to restaurants, businesses and private homes,” Cherchuck said.

Her customers seem to appreciate the advantage of orchids, some of which can bloom for up to three months.

“One of the big selling points of orchids is how long they stay in bloom,” she said.

Chadwick & Son Orchids in Powhatan County offers a unique service for orchid owners. For a monthly fee, the greenhouse will board and care for out-of-bloom orchids until they re-bloom. Learn more from Virginia Farm Bureau’s weekly television program, Real Virginia, at bit.ly/rv18orchids.