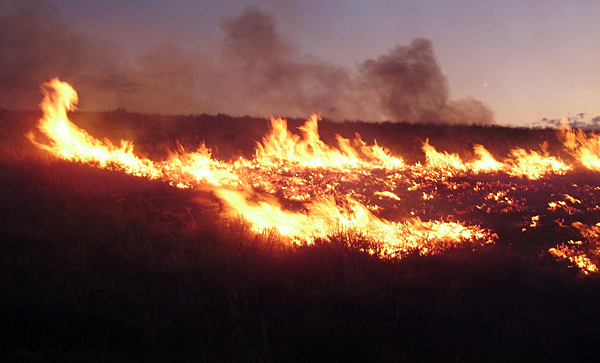 According to the Virginia Department of Forestry, forest fires are most often caused by debris burning. But the VDOF said negligence also can cause forests or trees or fields on farms to burn. (Wikimedia Commons)

CARRSVILLE, Va. — As Smokey Bear has told Americans since 1947, “Only YOU can prevent forest fires.” Turns out, he’s right because fires are often preventable.

According to the Virginia Department of Forestry, forest fires are most often caused by debris burning. But the VDOF said negligence also can cause forests or trees or fields on farms to burn.

Daryl Butler, who farms in Isle of Wight County, experienced a fire on his farm April 6. “I lost about 30 acres of newly planted pine trees. My neighbor lost about 50 acres,” Butler said. “It appeared the fire started on the side of the road near the property.”

He said Chief Chris Carr of the Carrsville Fire Department explained to him that the relative humidity was below 45, there was minimum surface moisture, and the high winds presented very high wildfire conditions that day.

Butler is a former firefighter with 15 years’ experience and said he’s seen “chains dragging from under vehicles creating sparks which caused a fire, and even saw an instance where a vehicle was backfiring and caused multiple fires along the roadside.”

The fire on his farm took about five hours to get under control, he said, with six fire departments responding and nearly 20 pieces of equipment involved. “Several homes were in danger, but the excellent response time from the Carrsville Volunteer Fire Department kept the fire from homes or livestock.”

Kevin Bartal, a firefighter and Virginia Farm Bureau safety coordinator, said it’s important that people use caution around farms and forests because of the potential for starting fires unintentionally, especially during dry weather. “It only takes a small heat source, fuel and oxygen to start a small fire that can spread quickly. Use extra caution with any open burning when the winds are blowing. Delaying the use of open flames during these situations lessens the risk of a catastrophic incident.”

Virginia’s 4 p.m. Burning Law is currently in effect through April 30 to help prevent forest fires. The law states no burning permitted before 4 p.m. if the fire is in or within 300 feet of woodland, brushland or fields containing dry grass or other flammable materials.

VDOF stated that since forest fuels cure during the winter months, the danger of fire is higher in early spring than in summer when the forest and grasses are green with new growth. The burning law is an effective tool in preventing forest fires. Localities may have more restrictive outdoor burning laws.

The law is different from burning bans, which are invoked only during periods of extreme fire danger.

The full text of the law is available at dof.virginia.gov/laws/index.htm#BurnLaw.