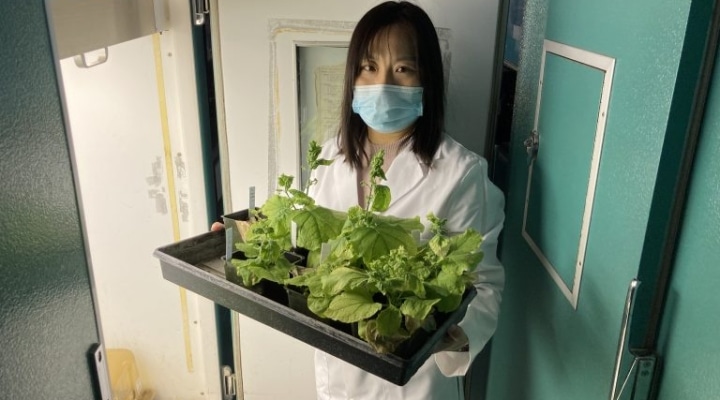 The study published in Frontiers in Plant Science found that viral proteins interact with each other to help a virus hijack its host plant and complete its life cycle. When some of these viral proteins were disabled, the researchers found that the virus could not move from cell to cell. These proteins are also doing double duty, inducing disease as well.

“These silencing suppressor proteins are interacting with each other in a seamless, highly coordinated lockstep dance to help the virus in overcoming the host defense,” said WSU virologist Hanu Pappu, the senior author on the paper.

Insights into the dynamics of these interactions could provide clues for blocking them, Pappu added.

“We are using genome editing approaches to do exactly that,” he said. “The more we understand about how these viruses bring down defensive ‘shields’ and cause disease, the better chance we have of saving plants from viral invaders.”

A silent, behind-the-scenes arms race between plants and the viruses that prey on them has been going on for millions of years. Viral diseases cost more than a billion dollars in losses annually to food, feed, and fiber crops worldwide, according to the Food and Agriculture Organization (FAO) of the United Nations.

“Star Trek’s Federation-versus-Klingons is playing out in real life,” said Pappu. “When the plant senses an attack by a virus, its ‘shields’ go up. Viruses are finding ways to lower the shields or slip through them and eventually take over the plant.”

Pappu, the in WSU’s Department of Plant Pathology, studies viral proteins that suppress or evade plant defenses, ultimately devising ways to help plants repel pathogens. He and his team have been studying a group of pathogens called geminiviruses—among the most crop-destructive viruses in many parts of the world.

Lead author Ying Zhai, a WSU research associate, set out to identify which viral proteins are suppressing defenses and understand how these molecules interact with other viral proteins upon infection. Working with Anirban Roy and his team at the Indian Agricultural Research Institute, she examined a specific, damaging geminivirus, the Croton yellow vein mosaic virus. Ying and Roy learned where the viral silencing suppressor is located within cells, how it interacts with cells and brings on symptoms, and how it helps the virus move from cell to cell.

Using a technique called confocal microscopy, which focuses a tight beam of light on a small target area, co-author Dan Mullendore at WSU’s Franceschi Microscopy and Imaging Center studied individual viral proteins and where they localize inside host cells.

While most viruses make one protein with a specific function to defeat their host, Zhai and Roy found that this geminivirus contained not just one but four different proteins that take part in bringing down plant defenses. Using highly sensitive molecular and microscopic methods, they found that these viral proteins were interacting to help the virus. When some were disabled, the virus could not spread in the plant.

Other co-authors on the study include Gurpreet Kaur, Bikash Mandal, and Sunil Kumar Mukherjee of the Advanced Center for Plant Virology, Indian Agricultural Research Institute, New Delhi; and Hao Peng, formerly of WSU Department of Crop and Soil Sciences, now at WSDA.

The project was supported by the U.S. Department of Agriculture’s National Institute of Food and Agriculture Hatch Act funding.