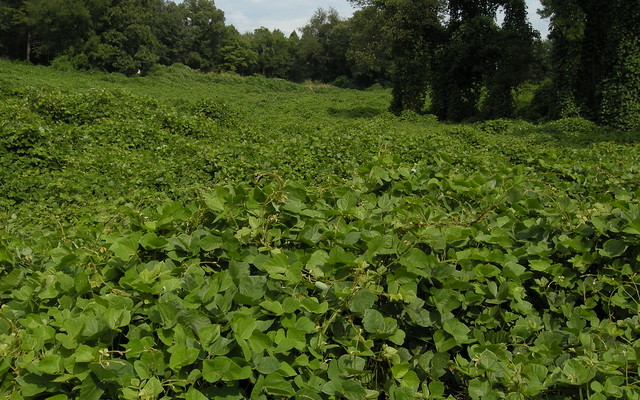 Kudzu is native to Asia and was introduced to the United States in 1876 as part of a horticultural exhibit in Philadelphia to celebrate the 100th anniversary of the signing of the Declaration of Independence. Japan, one of the participants, contributed a garden filled with kudzu and other plants previously never found in America.(photo by Nicolas Toper, creative commons/flickr.com)

FAR HILLS, N.J. — You might think kudzu – jokingly referred to as “The vine that ate the South” – is an exotic sport!

But it’s a fast-growing, highly invasive vine. And it is spreading into this state we’re in and beyond.

“The bottom line is we’ve got to kill it before it starts spreading,” he said. “It can cover acres and acres, every tree.”

Kudzu is native to Asia and was introduced to the United States in 1876 as part of a horticultural exhibit in Philadelphia to celebrate the 100th anniversary of the signing of the Declaration of Independence. Japan, one of the participants, contributed a garden filled with kudzu and other plants previously never found in America.

But kudzu got its biggest boost during the Dust Bowl crisis of the 1930s, when prolonged drought turned farms in the Great Plains to dust. Researchers discovered that the vine’s unusually deep and long roots held the soil together. Some advocates declared it a “miracle vine.”

“A lot of vines were planted on purpose for soil erosion control,” said Van Clef. “They probably got planted because they were really aggressive and would cover the ground fast.”

More than 70 million kudzu seedlings were cultivated by the U.S. Soil Conservation Service. To sell farmers on the idea, the government paid as much as $8 per acre to plant the vine. By 1946, almost 3 million acres of kudzu were planted.

Kudzu did seem miraculous … until it got loose!

In Japan and Korea, kudzu was mainly a mountain plant whose leafy vine would die back during the cold winters. Its spread was kept in check, but in the warm South there were no constraints.

Kudzu vines can spread at the rate of almost a foot a day, or about 60 feet in a growing season. Kudzu patches blanket trees and other vegetation, climb utility poles and cover abandoned buildings. Kudzu can kill trees through girdling, and the weight of its vines can topple trees.

In 1970, the U.S. Department of Agriculture listed kudzu as an invasive weed. In 1998, it was placed on the federal noxious weeds list. Today it’s estimated that kudzu covers over 7 million acres in the South, with the heaviest concentrations in Georgia, Alabama and Mississippi.

Until recently, kudzu wasn’t considered a threat in New Jersey because of our cold winters and short growing season.

Van Clef said most kudzu patches in New Jersey haven’t been able to set fruit and spread seeds. But one patch in southern New Jersey has borne fruit, leading him to believe “it’s just a matter of time” before it expands in our warming climate.  “Game’s on if we don’t start getting rid of them soon,” he warned.

The NJ Invasive Species Strike Team has been working this summer to eradicate kudzu in Monmouth County’s Hartshorne Woods Park, and on three private properties in Salem and Gloucester counties. The Strike Team was also called out to a private property in Passaic County.

But due to kudzu’s large and tough root structure, Van Clef noted, it takes multiple years to fully eradicate each patch.

If you spot a rapidly-growing vine that might be kudzu, please notify the Strike Team at info@njisst.org immediately!

To learn more about kudzu and other invasive species in New Jersey – including how to download a free invasive species identification smartphone app – visit the Strike Team website at https://www.fohvos.info/invasive-species-strike-team/info-center/. The Strike Team is a project of the nonprofit Friends of Hopewell Valley Open Space.

New Jersey ranks #1 in the nation for addressing loss of farmland
May 28, 2020

Learn how to identify and control invasive species
April 1, 2020