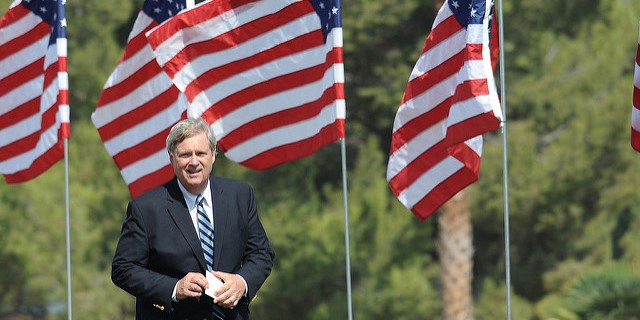 As Vilsack leaves the department — aides said Friday morning that the former Iowa governor had left the building and was boarding a flight to his home state — some in farm country are worried that agriculture may be a low priority for the new administration. It is the only Cabinet position Trump has not moved to fill, yet rural voters were key to delivering him the presidency. (U.S. Department of Agriculture, Flickr/Creative Commons)

WASHINGTON (AP) — Secretary Tom Vilsack left the Agriculture Department a week before his tenure ends and before President-elect Donald Trump has chosen his replacement.

Vilsack, who has led USDA for eight years and was President Barack Obama’s longest-serving Cabinet secretary, told employees in an email that Friday is his final day. The email did not say why he was leaving early. He has said he wants to remain involved with agriculture after leaving government, but has not detailed those plans.

As Vilsack leaves the department — aides said Friday morning that the former Iowa governor had left the building and was boarding a flight to his home state — some in farm country are worried that agriculture may be a low priority for the new administration. It is the only Cabinet position Trump has not moved to fill, yet rural voters were key to delivering him the presidency.

“When that individual is named, he or she will be at a tremendous disadvantage, in terms of getting up to speed on all this department does,” Vilsack said in a statement, noting he was confirmed on Obama’s first day in office.

Farm-state lawmakers in Congress say they are eagerly awaiting the decision.

“We brought him home,” Kansas Sen. Pat Roberts, the Republican chairman of the Senate Agriculture Committee, said Thursday of delivering on Trump’s win. “Farmers, ranchers and small town America brought him home. So obviously they’d like to see a secretary of Agriculture that would be their champion. That hasn’t occurred yet. So we hope it will.”

According to exit polls conducted for AP and television networks by Edison Research, about 17 percent of voters in this year’s election were from small cities or rural areas, and 62 percent of them said they voted for Trump. But Trump has little agricultural history, and spoke rarely about farm issues on the campaign trail.

“People don’t know what he stands for in agriculture and everyone’s waiting for the secretary to be named so you can get some clues,” said Roger Johnson, head of the National Farmers Union. Johnson said there is a “growing, intense frustration” that a secretary hasn’t been named.

Trump and his team have interviewed several candidates, including former Georgia Gov. Sonny Perdue and former California Lt. Gov. Abel Maldonado. They have also talked to potential candidates from Texas and Indiana, home state of Vice President-elect Mike Pence. Ted McKinney, director of the Indiana State Department of Agriculture, was at Trump Tower on Thursday.

Kansas’ other senator, Republican Jerry Moran, heads the Senate Appropriations subcommittee that oversees USDA. He said he contacted incoming Trump chief of staff Reince Priebus this week about the search and told him that who the secretary of agriculture is “matters greatly,” and “if there were any problems in that regard I was to be of help.”

Moran said he was reassured that the Trump team is working hard to find the right person.

“I am absolutely convinced this is a priority issue for the transition,” Moran said.

Incoming White House Press Secretary Sean Spicer, in a daily briefing call with reporters on Friday, played down any talk of a delay with the agriculture selection, saying that the president-elect had given it the same amount of attention and consideration as his other Cabinet picks.

Spicer said Trump had met with “several” qualified candidates and would make a decision in the near future. Trump will be sworn in Jan. 20.

Vilsack is one of the nation’s longest-serving agriculture secretaries and has remained generally popular in farm country as he worked to balance the needs of high-dollar production agriculture with other growing parts of the industry, including organics. During his tenure, he also focused on rebuilding rural communities, making school meals healthier and resolving civil rights claims against the department.

As for his next steps, he said in a statement that “I intend to be involved in promotion of agriculture and rural America, I hope to be connected to a university and work with young people, and I want to spend time with my family in Iowa.”

Michael Scuse, undersecretary for farm and foreign agricultural services, will be acting secretary until Trump is inaugurated.