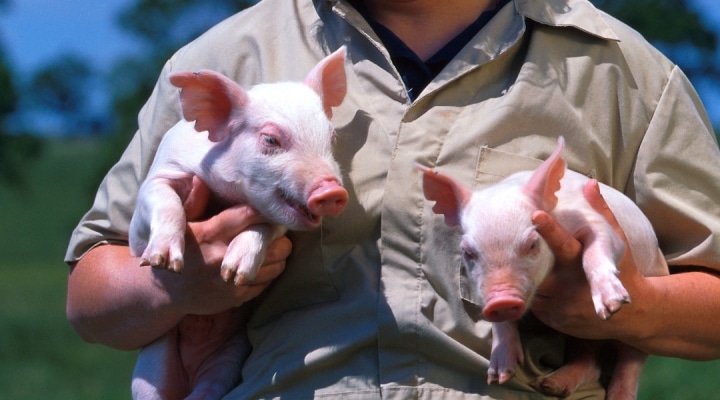 African Swine Fever (ASF) was originally detected in 2007 in the Republic of Georgia and is known to cause virulent, deadly disease outbreaks in wild and domesticated swine. (U.S. Department of Agriculture, Public Domain)

WASHINGTON — Agriculture Secretary Tom Vilsack today applauded research and protection efforts underway at the U.S. Department of Agriculture’s (USDA) Agricultural Research Service (ARS) and Animal and Plant Health Inspection Service (APHIS) to prevent the spread of African Swine Fever virus, which has been causing devastating losses to the swine industry across the globe.

“USDA agencies are working together to protect U.S. livestock from foreign and emerging animal diseases that could harm our economy and public health,” said Secretary Vilsack. “I am proud of the extraordinary research underway at the Agricultural Research Service to develop vaccine candidates to prevent African Swine Fever virus. In addition, the Animal and Plant Health Inspection Service has done tremendous work to establish protection zones to safeguard the entire U.S. swine industry. Scientific research, discovery, surveillance and detection are critical to solving challenging problems that American producers face to keep our food supply robust and safe.”

African Swine Fever (ASF) was originally detected in 2007 in the Republic of Georgia and is known to cause virulent, deadly disease outbreaks in wild and domesticated swine. Since the original outbreak, ASF has had a widespread and lethal impact on swine herds in various countries in Eastern and Central Europe and throughout Asia. Although the virus is causing profound economic losses to the swine industry, there have not been any U.S. outbreaks. However, a few weeks ago ASF outbreaks were confirmed in the Dominican Republic, the first outbreak in the Americas in recent history. APHIS has vigilantly executed safeguards to prevent ASF from entering the United States. The virus is unable to transmit from pigs to humans.

The Agricultural Research Service published new research today, that highlights a new vaccine candidate that has been shown to prevent and effectively protect both European and Asian bred swine against the current circulating Asian strain of the virus.

Previous studies were done under laboratory conditions only in European bred pigs using an ASF virus sample from the initial outbreak. ARS’s new vaccine candidate studies revealed that immunity occurred in approximately one-third of swine by second week post-vaccination, with full protection in all swine achieved by the fourth week.

This research, highlighted in the journal Transboundary and Emerging Diseases, shows that ARS scientists have developed a vaccine candidate with the ability to be commercially produced while still maintaining its vaccine efficacy against Asian ASF virus strains when tested in both European and Asian swine breeds.

“We are excited that our team’s research has resulted in promising vaccine candidates that are able to prevent and protect different swine breeds against the current ASF virus,” said ARS Administrator Chavonda Jacobs-Young. “Vaccine candidates could play an important role in controlling the ongoing outbreak threatening global swine health.”

ARS researchers will continue to determine the safety and efficacy of the vaccine under commercial production conditions and are closely working with their commercial partner Navetco National Veterinary Joint Stock Company, located in Vietnam.

To date, ARS has successfully engineered and patented five ASF experimental vaccines and has fully executed seven licenses with pharmaceutical companies to develop the vaccines. ARS continues to evaluate additional commercial partners to develop these vaccines.

This is a major step for science and agriculture. A commercial vaccine for ASF virus will be an important part of controlling ASF in outbreak areas. All U.S. vaccine candidates have to go through the APHIS regulatory approval process for use in U.S. swine.

“The partnership between APHIS and ARS is critical in protecting U.S. animal agriculture from devastating diseases like ASF,” said Kevin Shea, APHIS Administrator. “ARS’s work in researching and developing vaccine candidates provides valuable tools to animal health organizations worldwide in combating ASF. APHIS is ready to evaluate potential ASF vaccines for use in the United States.”