Home » Video explains how wheat has changed over last century 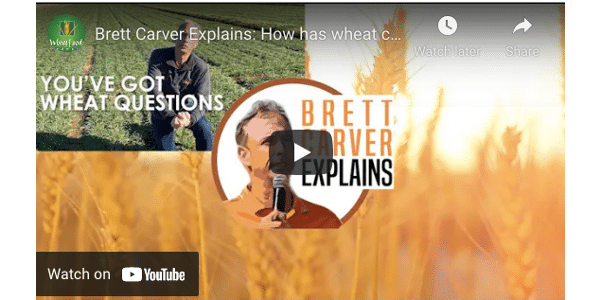 MANHATTAN, Kan. — Amber waves of grain are an iconic landscape, but that does not mean today’s varieties are exactly the same as the wheat fields harvested when Katharine Lee Bates penned the lyrics to America the Beautiful.

Wheat has been cultivated for nearly 10,000 years, linked to the ancient grains einkorn and emmer. The lineage of these grains still exists, but centuries of selective wheat breeding established wheat as the cereal crop we know today. In the 20th century, researchers really started to unlock the potential of the wheat genome to benefit farmers and their global consumers.

“We use that century mark because wheat breeding really got its beginnings in the United States, including Oklahoma, in the 1920s,” Carver, the wheat genetics chair in agriculture at Oklahoma State University, explained in the video.

Since that time, wheat breeders like Carver have used the genes that already exist in wheat to help select varieties with specific traits that allow the plant to be more resilient and a better producer of grain. For example, agronomist and humanitarian Norman Borlaug bred wheat that was shorter — and stronger — than other varieties at the time. Known as dwarf wheat, these plants were shorter, but stood straight in the fields, even during gusty days.

“We have a plant that today is a little bit shorter than it was 100 years ago,” Carver said, “and most importantly, it has stronger straw so it can withstand the winds that we see in the Great Plains and elsewhere in the country.”

This work by Borlaug kickstarted the “Green Revolution,” which led to wheat varieties that focused energy on grain production, rather than plant height. Borlaug’s wheat was credited with saving more than a billion lives and earned him a Nobel Peace Prize. Since that time, wheat researchers have continued Borlaug’s legacy by continually seeking out varieties with more naturally occurring disease resistance, drought tolerance and many other factors that increase productivity.

Overall, wheat breeding over the last 100 years has resulted in golden arches of wheat that help feed the world, all while using the less land and resources to do so.

“The wheat today is a tougher plant and can do more with less — that about sums it up,” Carver said. “In other words, we’re trying to produce more food, more grain than we did 100 years ago with less land area to do it with. That’s the challenge we’re going to keep facing as we move forward, as our population grows and our land area for crop production diminishes. So, we have to improve productivity.”

Stay tuned for answers to more consumer questions through the Wheat Foods Council, a leading source of science-based information on wheat and grain foods nutrition. Kansas Wheat is a member, along with grain producers, millers, baking suppliers, life science companies and cereal manufacturers.

Want to know more in the meantime? Check out EatWheat.org for information on farming practices, wheat foods nutrition, recipes and more.