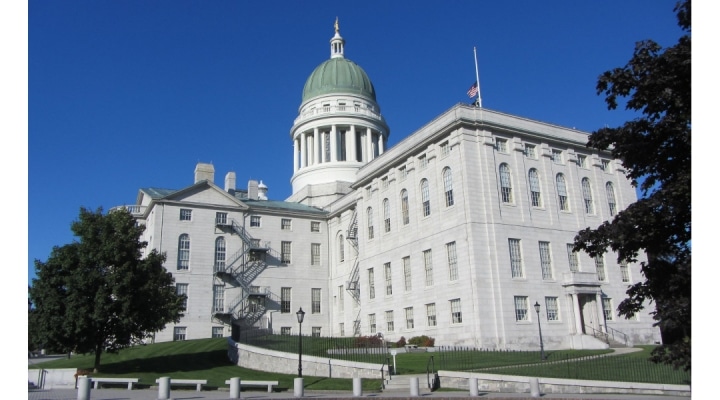 The proposal passed narrowly last year and the vote was even closer Wednesday, 66-67, failing to muster a two-thirds majority to override the veto in the House. Republicans were united in opposition. (Maine State House; David Wilson, Flickr/Creative Commons)

AUGUSTA, Maine (AP) — Maine lawmakers met Wednesday in person for the second time this month, upholding the governor’s veto of a bill that would have allowed farm workers to unionize.

The proposal passed narrowly last year and the vote was even closer Wednesday, 66-67, failing to muster a two-thirds majority to override the veto in the House. Republicans were united in opposition.

The bill’s sponsor, Rep. Thom Harnett, D-Gardiner, said he had no regrets for pushing for what he previously called “just, right and moral.”

In other action, the Senate unanimously confirmed the state’s new public advocate, William Harwood, who replaces Barry Hobbins, who retired.

Harwood, who was quickly sworn into office by Gov. Janet Mills, is a utilities lawyer who served as a senior advisor in the governor’s energy office. He also received a unanimous endorsement from the Joint Committee on Energy, Utilities and Technology.

“This is an important time for Maine and there is abundant work ahead to represent and protect the interests of Maine ratepayers, hold our utilities accountable to ensure delivery of affordable, reliable service to all Maine people, and help navigate the energy transition in Maine and its effect on our climate, environment and economy,” he said.

There was a new face in the Legislature. Rep. Jim Boyle, D-Gorham, was seated after winning a special election to fill a seat vacated by Democrat Kyle Bailey because of a job conflict.