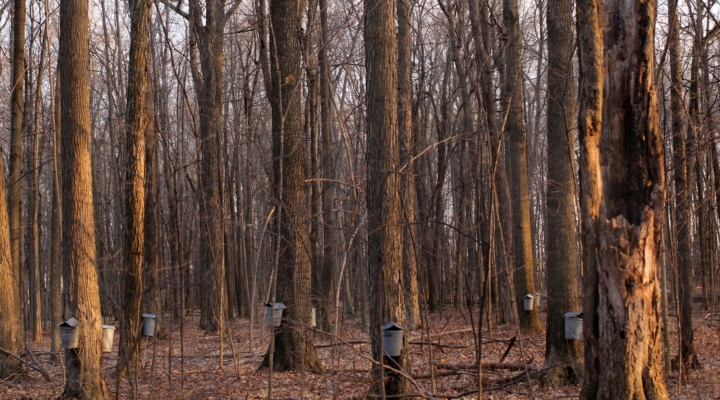 With an estimated 40K+ visitors touring the state for last year’s event, we can expect that number to grow with the expansion and draw from twenty-two new participating locations on the map in 2019. (LadyDragonflyCC - >;<, Flickr/Creative Commons)

JERICHO, Vt. — Vermont leads the nation by a commanding margin as the top maple producing state. Total US maple syrup production in 2018 was 4.1 million gallons, with Vermont’s contribution accounting for more than 1.9 million of those gallons. In the spirit of friendly competition (‘tis the season of March Madness after all), Maple Open House Weekend is a chance for Vermont sugar makers to do their victory dance while opening the doors of their sugarhouses for visitors traveling from near and far wanting to see, taste, and experience firsthand why people should think of Vermont first when they think of maple syrup. With an estimated 40K+ visitors touring the state for last year’s event, we can expect that number to grow with the expansion and draw from twenty-two new participating locations on the map in 2019. In addition to sugarhouse experiences, event weekend visitors can expect to be amazed by the extensive display of maple uses showcased by partnering local Vermont businesses who specialize in their own craft and support Vermont’s maple industry by including maple in their ingredients, on their menus, and offered for sale at their locations.

Not all just fun and games (though there is plenty of that to be had), visitors will be welcomed by their sugar maker hosts who are eager to educate and share with the public the sap to syrup process. With each sugarhouse providing a different experience, visitors are encouraged to plan travel routes to visit sugarhouses in all corners of the state. Some traditional Open House activities include sampling syrup; pancake breakfasts; horse-drawn sleigh rides; sugar-on-snow parties; and plenty of maple products to taste including maple donuts, maple cotton candy and maple creemees.

Each partner location impressively capitalizes on the flavor qualities of maple as a key component for the unique and diverse recipes and menu items appearing throughout the weekend. A few of the new stops this year include Lawson’s Finest Liquids at their stunning new Taproom in Waitsfield featuring two of their maple beers brewed with maple syrup from Purinton Maple and Tree Farm (a sugarhouse tour stop in Huntington). Bluebird Barbeque in Burlington, rated as “one of the top 45 spots from coast to coast” by the Food Network, is featuring a full maple menu for the weekend including fried brussel sprouts with Runamok Maple (tour stop in Fairfax), a pulled pork flatbread topped with Mountain Maple BBQ Sauce, and a Vermont apple hand pie.

A couple of the returning partners joining the event festivities again this year include Saxton’s River Distillery in Brattleboro, featuring tastings of their Sapling Maple Liqueur, Maple Bourbon and Maple Rye, all made using Vermont maple syrup. And if a perfect marriage were to exist, it might be between maple and chocolate. Lake Champlain Chocolates will be featuring (at all three of their Burlington and Waterbury locations) a limited-edition maple caramel covered in dark chocolate and sprinkled with maple sugar. The stores will also have on sale their maple products including their best-selling maple caramel bar, maple crunch, maple butter pecan ice cream, and maple lattes.

This is just a snapshot of all that will be going on around the state at 138 sugarhouse and partner businesses celebrating the 2019 Maple season and the sugar makers that keep Vermont at the top! For more information about the weekend and to view the map and list of participating sugarhouses, partnering businesses, and incredible Vermont lodging options, visit: www.vermontmaple.org/mohw.