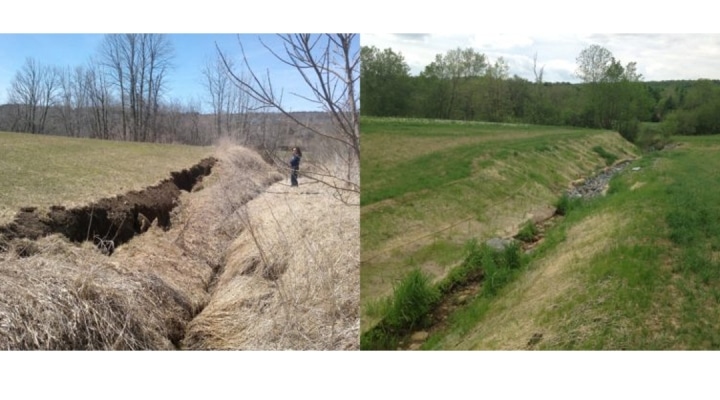 Thanks to Peter and Lorie Hutchins and support from the State, this project will prevent an estimated 453 pounds of phosphorus from entering the Missisquoi Bay. (Courtesy Photo)

BERKSHIRE, Vt. — Peter and Lorie Hutchins own and operate a small dairy farm along the Pike River in Berkshire where they milk about 65 cows.

The Hutchins do just about everything themselves on the farm to keep the business running and like many other small dairy farms, they have been doing their part to improve water quality on their farm for years in ways that often go unnoticed. They grow hay and corn, but mostly hay. They cover crop their corn fields each winter and have done so at their own expense. They follow a Nutrient Management Plan certified by UVM Ext. and update it each year.

Most recently, the Hutchins stepped up their water quality efforts and worked with the Conservation District and the State to implement an innovative stream restoration project along 500 ft. of a tributary to the Pike River. The stream, straightened decades ago, suffered a massive bank failure in the spring of 2018 after years of undercutting had compromised the stability of the slope.

Although this project was set in motion due to a particularly evident mass bank failure, the condition of the stream on the Hutchins farms is representative of many other small stream networks across Franklin County and much of Vermont.

In a natural setting, water is free to bend, wind, bow, twist, crook and seep as it makes its way across and through our landscape. If given time and space, our streams and rivers can attain their least erosive form, allowing them to provide their most essential ecologic functions: habitat, flood resilience, and clean water.

Despite this fact, much work was done in the last century to change the way water moves across our landscape. Streams were buried, straightened, dredged, drained, rerouted, walled, dammed, culverted, and “cleaned up” to accommodate downtowns, houses, roads, railroads, farm fields, and aesthetic preferences.

In fact, it was the Conservation District and Soil Conservation Service that provided the funding, engineering, and machinery to do much of this work throughout the state. And although these alterations were made with our communities’ best interest in mind, part of the legacy of this landscape change is unstable streams that erode more and provide less habitat.

Emphasizing this point is the fact that nearly 25% of the total phosphorus load to Lake Champlain is attributed to sediment erosion from unstable streambanks.

Today, the Conservation District, watershed groups, and the State are working with local landowners to restore some of these altered waterways back to a more natural state to improve water quality and create habitat.

“Small stream restoration is a crucial body of work Vermont needs to meet our clean water goals. We hope this project will help generate more like it across the state,” said Brodie Haenke, Conservation Specialist for the Franklin County Conservation District. “Through thoughtful designs and careful excavation work, we prevented decades of severe erosion. Sediment that would have otherwise been lost to the Pike River can now be reincorporated to Hutchins’ fields to grow valuable crops.”

With funding from the Vermont Dept. of Env. Conservation and Agency of Ag., the District hired Fitzgerald Environmental Associates and EcoSolutions to create small floodplains, grade slopes, strategically place rock, and widen the stream bank to prevent further excess erosion. In addition, willow stems and conservation seed mixes were placed along the disturbed surfaces to encourage quick revegetation.

“It just seemed like the right thing to do,” said Peter Hutchins about his motivations for partnering with the Conservation District to take on the stream project.

Thanks to Peter and Lorie Hutchins and support from the State, this project will prevent an estimated 453 pounds of phosphorus from entering the Missisquoi Bay.

Foodbank: Thousands of food boxes not delivered in September
October 15, 2020