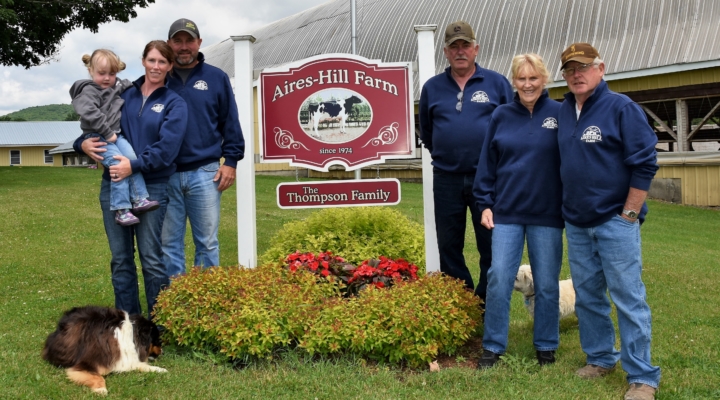 MONTPELIER — When Franklin Thompson began milking cows in 1826 on a 130-acre parcel of land abutting the Canadian border, little could he know that seven generations later, his Berkshire farm would still be operational–and thriving. Or that it would be the recipient of one of the most coveted dairy awards in the state, that of being selected as the Vermont Dairy Farm of the Year.

This year’s winner, Aires Hill Farm, is a 400-head Holstein operation on 550 acres of owned and rented land. Karie Thompson Atherton isthe primary manager and part-owner, responsible for making all the decisions in the daily operation of the farm.

She took over in August 2014 when her father Edward Orlyn Thompson and uncle James Bryan (Bernie) Thompson decided to retire. She was eight months pregnant with daughter Maggie at the time.

“It was a now or never decision,” Atherton recalls. “It was a big decision whether to sell or not, but I was unwilling to see the farm end.”

Aires Hill, one of several farms nominated this year, epitomizes everything that an outstanding dairy farm should including exemplary management practices and herd performance, high-quality milk production and a strong commitment to promoting the dairy industry. The judging committee, comprised of past Vermont Dairy Farm of the Year winners, also looked at production records, conservation practices and other criteria in addition to farm visits and interviews with the top four finalists.

University of Vermont (UVM) Extension’s Tony Kitsos, the awards program coordinator, says, “The judges all saw the same passion here as they themselves have for farming. They all commented that even in the face of low milk prices, Aires Hill has made a farm transition plan and has begun to put that in motion, and have made investments in the future through new technology to improve animal health and profitability.”

The award is presented annually by UVM Extension and the Vermont Dairy Industry Association (VDIA) in cooperation with the New England Green Pastures Program. Each of the six New England states selects its own winner, all of whom are recognized at an awards banquet at Eastern States Exposition in West Springfield, Massachusetts, in September. The Vermont winner is also the honored guest at the VDIA banquet at the Vermont Farm Show in January.

Other finalists for the award were Harrison’s Homegrown Organic Dairy (Melanie and Pat Harrison), Addison; Paul-Lin Dairy (Paul, Linda and Claire Stanley), East Fairfield; and Skyline Holsteins (Sheena Daigle), Derby. “Judges were equally impressed with the passion of all of these farms for dairying, innovations in marketing and forward thinking,” Kitsos notes.

“This is down from last year when cows were averaging 82 to 84 pounds with 4.1 percent butterfat,” she notes. “In 2016 conditions were perfect. The crops did well. The cows cruised with no problems. You never want to see a drop in production, but given the current milk prices, it’s not been feasible this year to increase the grain ration.”

Despite the challenge of maintaining a high-producing herd, the farm, which ships its milk to the St. Albans Cooperative Creamery, has a well-deserved reputation for consistently producing high-quality milk.

According to Amy Maxham, the co-op field representative who nominated the farm, “Aires Hill Farm has been with St. Albans Cooperative since 1986 and has shipped high-quality milk for 32 consecutive years. The farm has had an average somatic cell count of less than 100,000-120,000 at least since 2013. In 2016 they received an award from St. Albans Co-op for Platinum Quality milk and for having two inspection scores of 100.”

Atherton attributes open communication with her employees and service providers as one of the keys to the farm’s success but acknowledges that she wouldn’t be where she is today if not for her parents and uncle.

“I really owe everything to them for the opportunity to farm. I wouldn’t be here if it wasn’t for them. They built this operation. I’m just riding their coattails.”

Atherton also believes that attention to cow comfort and getting calves off to a healthy start are critical to a successful dairy operation.

She replaced all the mats in the free-stall barn, a move that has led to contented cows and boosted milk production, and added grooved cement floors in the barn and milking parlor to minimize risk of cow injuries. In addition, the farm has had a closed herd for the past 14 years, a decision that has reduced incidence of bringing in diseases from other herds and contributed to better overall calf health.

“We raise about 100 heifer calves a year, starting them off with a gallon of colostrum,” the 37-year-old farmer says. “As soon as we collect the colostrum, we test it with a refractometer. If the immunoglobulin is 22 or higher, it’s good, and it goes into a colostrum storage bag and then in the freezer right away. It’s an added expense to feed with the bags, but it’s worth it. We don’t need to handle the milk every time, so it’s more sterile. Each newborn is put in a warming box with a light for 24 hours and also gets a calf jacket.”

Heifers are bred to freshen at 23 months with a calving interval of 12.8 months. Sexed semen is used on first service to virgin heifers to keep the heifer replacement rate higher.

The farm grows all its own forages, supplementing with purchased grain, including 250 acres of grass, yielding 4 to 6 tons of dry matter per acre, and 130 acres of corn (80 grown with minimum till) yielding 18 to 19 tons of silage per acre. Cows are fed a 60 to 40 forage-to-concentrate ratio of TMR (total mixed ration) along with bypass fat to help improve body condition.

“Aires Hill Farm was innovative and implemented a nutrient management plan within the dairy before the time it was made mandatory,” Maxham says. “They cover crop 100 percent with winter rye and have done so for close to 10 years. Buffers and no access of cattle to streams were in place as well before it was mandatory.”

The farm also uses rotational grazing for dry cows to help reduce feeding costs. “We have four paddocks and rotate every two days, giving each paddock six days of rest for the grass to grow,” Atherton says.

Earlier this year Aires Hill received a matching $40,000 grant from the Vermont Housing and Conservation Board to purchase rumination collars to help monitor the cows’ activity.

“These alert me if something’s off about a cow,” Atherton says. “They pick up on more fresh cow problems, letting me know if a cow is in heat or requires attention.” Although she only began using these in late June, she has already seen promising results and expects to see a payback in three years. She will implement the second-phase of her grant–that of a cow identification system in the milking parlor–in the near future.

“Exiting generations of successful farms tend to manage well with what they have, holding off on investing in new technology unless there is a clear plan for someone to take over,” Kitsos says. “They tend to have retirement at their forefront, whereas the next generation has new farm improvements on their horizon. With Karie as the primary manager, the farm sees a clear path forward for investments in new technology.”

Atherton is a former 4-H’er and is active in the St. Albans Co-op Young Cooperators, serving as its secretary, and helping with the float for the Vermont Dairy Festival parade in Enosburg Falls each year. She also works with the Cold Hollow Career Center, offering students an opportunity to work on the farm to learn about dairying to determine if it is the right career choice for them.

She is active in farmer causes, including the Ben & Jerry’s Caring Dairy program at the Gold Level. The latter involves meeting and maintaining certain standards for animal care and welfare; cropping, grazing and environmental practices; and wages and work environment for employees.

As to the future, Atherton doesn’t foresee any major changes.

“I have done three big projects in three years, so for now I plan to sit tight. We do need new corn bunkers,” she admits, acknowledging that milk prices will need to be higher before she takes that step. In addition to the rumination collars, in the past few years she has also purchased a tractor with front and back mowers and installed two-strand high tensile fencing around the heifer pasture.

“Farms that will make it through these recent economically challenging times must have a passion for this business. Karie and her family have demonstrated this passion,” Kitsos concludes. “She has continued to make smart and affordable investments in the operation through these tough times, making her poised and ready to reap benefits when things turn around.”

To learn more about the farm and what goes on at a dairy, follow Aires Hill on Facebook at www.facebook.com/aireshillfarm.