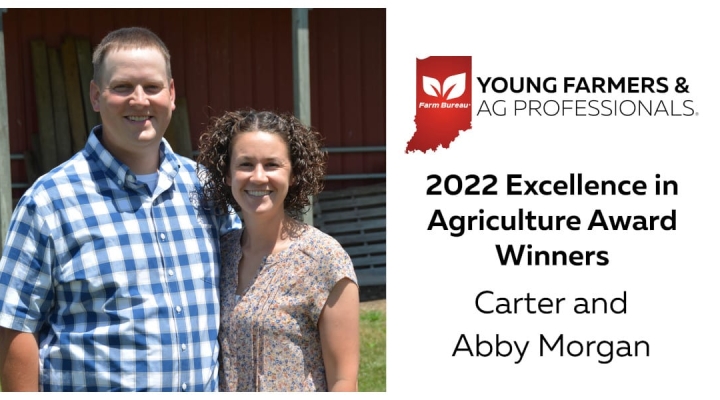 Carter and Abby Morgan, Vermillion County, won the Excellence in Agriculture Award, which honors Indiana Farm Bureau members who do not derive the majority of their income from an owned, production agriculture operation, but who actively contribute and grow their involvement in Farm Bureau and agriculture. (Courtesy Photo)

INDIANAPOLIS — Carter and Abby Morgan of Vermillion County and Johan and Déjanne de Groot of Huntington County are the winners of two of Indiana Farm Bureau’s top awards for Young Farmers & Ag Professionals – the Excellence in Agriculture Award and the Achievement Award.

Two panels of judges evaluated this year’s participants. Excellence in Agriculture candidates were judged on their involvement in agriculture, leadership ability, as well as their involvement and participation in Farm Bureau and other organizations. The Achievement Award candidates were judged on their leadership abilities and what they have achieved with their farms.

Carter and Abby Morgan, Vermillion County, won the Excellence in Agriculture Award, which honors Farm Bureau members who do not derive the majority of their income from an owned, production agriculture operation, but who actively contribute and grow their involvement in Farm Bureau and agriculture. The Morgans will receive an $11,000 cash prize, courtesy of Farm Credit Mid-America and Indiana Farm Bureau Insurance, and an all-expenses paid trip to San Juan, Puerto Rico to compete at the 2023 American Farm Bureau convention in January.

Johan and Déjanne de Groot, Huntington County, won the Achievement Award, which recognizes INFB members who earn the majority of their income from production agriculture and measures applicants on their leadership involvement and farm management techniques. The de Groots will receive an $11,000 cash prize, courtesy of Bane Welker Equipment and Indiana Farm Bureau Insurance, as well as an all-expenses paid trip to compete at the 2023 American Farm Bureau convention in San Juan, Puerto Rico in January. The de Groots also will be awarded the David L. Leising Memorial Award

Winners and finalists will be formally recognized during the INFB state convention in December. Learn more about this year’s winners below.

Carter and Abby Morgan took different paths to find their love of agriculture. Carter’s started at a young age as the fourth generation on the family farm producing corn, soybeans and wheat. Abby got her start in agriculture by showing sheep as a first-generation member of 4-H. They both attended Purdue University earning degrees in agriculture.

In addition to farming with his family, Carter serves as a soil health consultant at the local Soil and Water Conservation District where he promotes conservation practices such as no-till, cover crops and conservation management.

“Conservation is very important to our farm,” said Carter. “Keeping our soil in place and keeping our soil healthy is critical to allowing the next generation to be involved in agriculture and on the farm.”

Abby works as the 4-H Extension educator for Purdue Extension in Montgomery County. She serves over 600 youth from kindergarten through 12th grade and manages nearly 100 adult volunteers.

In addition to their involvement in 4-H and their local church, the Morgans are active Farm Bureau members, with Carter having served as a member of the county’s board of directors since 2013. The Morgans also served on the Vermillion County Farm Bureau YF&AP Committee from 2013 to 2021.

“Carter and I applied for the Excellence in Ag award because we want to give back to the ag industry and inspire the next generation of leaders,” said Abby. “We wanted to have a platform to talk about issues impacting agriculture and help provide solutions to those issues.”

Learn more about the Morgans here.

The de Groots own a diversified farm operation, which includes a large dairy farm of approximately 2,600 cows, as well as acreage for alfalfa and corn production. Both are natives of Holland. Johan moved to the U.S. in 2002 with his family to start the dairy farm. He graduated from Michigan State University where he studied dairy production. Johan manages the employees and multiple aspects of the farm, including a robotics facility. He also oversees the breeding program, manages crop rotations, and makes planting decisions.

“I have always enjoyed farming, even since I was a little kid,” said Johan. “I enjoy working with living animals, putting seed in the ground, encouraging employees and always striving to do better.”

After completing internships in the U.S., Déjanne finished her studies in agricultural entrepreneurship in Holland and officially joined Johan to run the family operation in 2018. Déjanne is responsible for all the bookwork, payroll and overseeing the heifer operation.

One of the de Groot’s goals for the future is expanding the farm with an agritourism component.

“We want to have people come out to the farm,” said Déjanne. “They could visit with the cows, see how they get milked, learn what they eat, and maybe we’ll create a small market for milk, yogurt and ice cream.”

The de Groots are active Farm Bureau members. Both chair the Huntington County Farm Bureau YF&AP Committee, and Déjanne also serves on the board as secretary and treasurer.