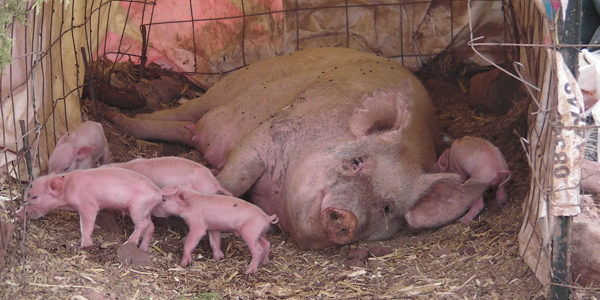 Kansas State University researchers have completed two exhaustive studies that measured the impact of how much feed a pregnant sow eats and the effect that has on her growth, feed efficiency and on her baby pigs. (velacreations via Flickr)

MANHATTAN, Kan. — Kansas State University researchers have completed two exhaustive studies that measured the impact of how much feed a pregnant sow eats and the effect that has on her growth, feed efficiency and on her baby pigs.

What they’re reporting is a set of good news findings for the industry: essentially, the current recommendations for gestating feeding programs are sufficient to support fetal growth and to support the mom’s weight gain.

“The ramifications are that it helps us with our feed allowances for gestating sows,” said Bob Goodband, a swine nutritionist in the department of animal sciences and industry. “We really didn’t see any major problems with sows and their litters with the current feeding practices producers typically implement on their farms. People don’t need to implement elaborate feeding programs; they just need to stick to the basics of gestation feeding.”

Goodband said the researchers were concerned that the sows would not be eating enough in the last week of gestation to support their energy requirements, which would mean that they would be unable to support fetal growth, weight gain and fetal gain. But, the studies’ results show that, “for the most part, they were able to do that,” according to Goodband.

The research involved two studies on a commercial farm, and involved more than 2,000 sows in group housing, or large pens of 270 sows in each. Kansas State University doctoral student Lori Thomas weighed more than 15,000 piglets over six months to help verify the findings.

“We monitored the sows throughout the entire course of gestation and we were able to partition out their nutrition requirements into how much energy in their diet went for maintenance, and growth of the sow, and how much was left over for her developing litter,” Thomas said.

The researchers monitored all of the sows using electronic sow feeding systems and ear tags equipped with electronic transponders. It allowed them to know exactly when the sow entered the feeding area and how much of the allocated 4 ½ to 5 pounds of feed she consumed.

After eating, the sow exited through an alleyway, where she had to cross over a scale before entering the main pen.

“Within the first 10-15 days, when we mixed the sows in the pen, we found that they don’t eat their full feed allowance that we expect them to,” Thomas said. “Both our young sows and our old sows might not be consuming all the feed they are offered in early gestation. That’s important for the producer to be aware of because a lot of times they think they put them in the pen and they just assume they are consuming all of their feed, but it’s really hard to monitor.

Thomas said that gathering feed intake values and body weights through the entire course of gestation is “unique, it’s never been done before on a commercial farm.”

“There’s a lot there about precision feeding and gestating sows, the importance of meeting nutrient requirements,” she said. “What we’re doing here is helping us define that.”

In a second study, the researchers also tested levels of lysine in swine feed, and its potential affect on piglet’s birth weight. They thought that by increasing the lysine intake of the sow’s diet, it might increase birth weight, an important consideration on many farms as litter size increases.

“As we increased the lysine level, it increased the sows’ weight gain, without affecting back fat thickness,” Thomas said. “This means that while not affecting the piglets weight, the sows that were fed more lysine probably had greater lean protein deposition. This might affect subsequent performance, and we are currently looking into that by following the sows through their second litter.”

“We see a lot of people over-formulate their gestation diets, and what Lori’s data is telling us is that you don’t necessarily have to do that,” he said. “From Lori’s data, our standard recommendations appear to be fine.”

Results of this study will be highlighted during the 50th annual K-State Swine Day, which takes place on Thursday, Nov. 16, in Manhattan. For more information on this year’s event, visit www.asi.k-state.edu/events/swine-day.

Rotational grazing to be highlighted at conference