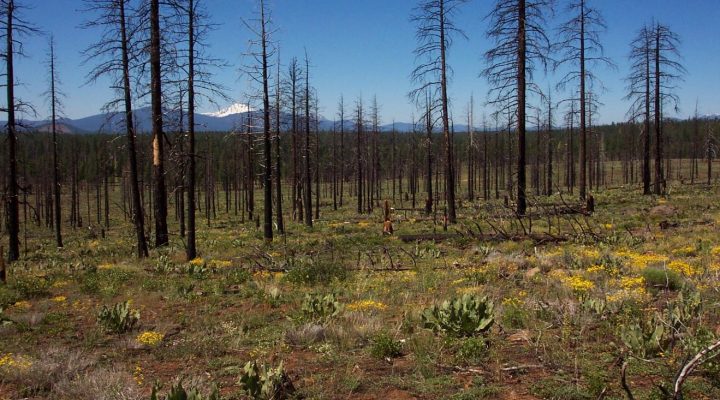 Nearly 10 years after having half its trees removed in a salvage logging operation following the 2002 Cone Fire in California's Lassen National Forest, the amount and variety of naturally regenerated plant life in this stand of trees differed little from a similarly burned area that wasn't logged. (Carl Skinner, US Forest Service)

SACRAMENTO — Nearly a decade after being logged, vegetation in forested areas severely burned by California’s Cone Fire in 2002 was relatively similar to areas untouched by logging equipment. The findings of a U.S. Forest Service study shed light on how vegetation responds to severe wildfire and whether further disturbances from logging affect regrowth.

The study, “Response of understory vegetation to salvage logging following a high-severity wildfire,” reports a modest difference between logged and unlogged areas for some shrubs, but researchers with the agency’s Pacific Southwest Research Station conclude the diversity of plant species and their abundance, as a whole, differed little between logged and unlogged sites. Salvage logging refers to the practice of harvesting fire-killed trees (“salvage”) to extract economic value from them before the wood decays.

The differences observed within the shrub communities could stem from the plants’ reproduction cycle and timing of the logging operations.

“The three native shrub species that declined in abundance with logging (prostrate ceanothus, snowbrush ceanothus and greenleaf manzanita) have seeds triggered to germinate by heat or char from fire,” said Eric Knapp, a research ecologist with the Forest Service and study co-author. Logging occurred more than a year after the fire, which would have coincided with the seedling stage of the new shrubs, making them vulnerable to surface disturbances.

“It is possible that the effect on shrubs might have been avoided if logging had been done soon after the fire, prior to seeds germinating,” Knapp said.

The relatively flat ground and rocky soil of the research sites within the Blacks Mountain Experimental Forest in California’s Lassen National Forest, where the Cone Fire burned, may have reduced negative effects associated with ground disturbance, leading researchers to caution applying their findings to areas where soil disturbance from logging is greater. However, the results do coincide with a growing body of evidence from other post-fire logging studies.

“Longer-term research is finding that understory vegetation might not be as substantially impacted by post-fire logging as originally feared,” said Martin Ritchie, Forest Service research forester and study co-author, “especially when care is taken to minimize soil impacts.”

Knowing that salvage logging doesn’t appear to significantly impact vegetation regrowth could allow researchers and land managers to instead focus attention on other aspects of post-fire logging that could benefit from further research.

“If future studies continue to not find strong longer-term salvage harvest effects on forest understory vegetation,” Knapp said, “the debates about pros and cons of post-fire management could then narrow to topics such as snag habitat and woody fuel levels that are unequivocally impacted by salvage harvest.”