Home / New York / Vegetable research results: Save time, add profit
A new user experience is coming! We'll be asking you to login to your Morning Ag Clips account March 1st to access these new features.
We can't wait to share them with you! Read more here. 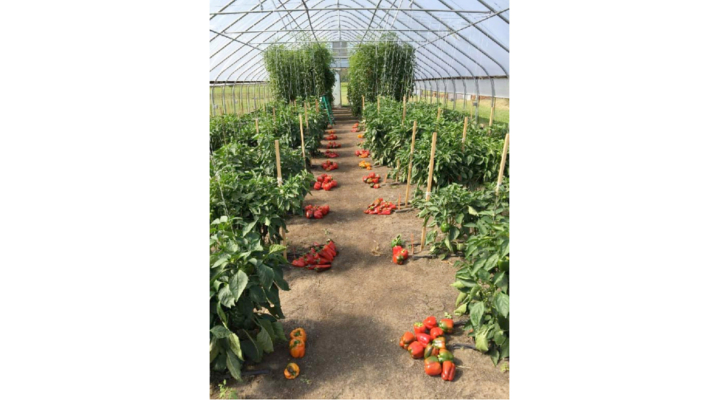 Tunnel-grown red peppers were harvested from August 23 through November in the NNYADP-funded vegetable trials in 2017 at the Willsboro Research Farm, Willsboro, NY. Cherry tomato trials are seen at the far end of the tunnel. (Photo: Amy Ivy)

WILLSBORO, N.Y. — Growers who are first to market with peppers, tomatoes, and other fresh market vegetables have a distinct advantage. Earlier spring crops, double yields, and the potential for $1390 in added net revenue are among the results noted in the 2017 vegetable production research report posted at www.nnyagdev.org by the farmer-driven Northern New York Agricultural Development Program.

In the pepper variety comparison within an unheated high tunnel, one variety yielded earlier in the spring and tapered off, the other yielded later and slightly higher but at a time when market demand was less.

In a comparison of pepper pruning and training systems, one system took less time and yielded a 1.5 lbs-more-per-plant average.

“The peppers clearly benefitted from the protection of a high tunnel, with more than double the production and a significantly earlier first harvest. Harvest timing is an important factor for peak sales and profitability in Northern New York,” Ivy noted.

The NNYADP-funded cherry tomato trial compared three systems for training and pruning cherry tomatoes, known for rampant growth, the managing of which can drain grower efficiency.

“Because labor is the largest expense on most vegetable farms, increasing our understanding of practices that can add production and harvesting efficiency is critical. These trials funded by the Northern New York Agricultural Development Program do that for our regional growers,” Ivy said.

“Our calculations determined the system providing the greatest benefits as measured by labor efficiency, yield, and net revenue was a double leader system. A high tunnel with 200 cherry tomato plants could see a possible gain of $1390 in net profit using this system compared to the less intensive multi-leader system,” Ivy noted.

The results of an evaluation of the availability of nitrogen from various sources in cold soils to support winter spinach production will be posted later this spring.

This research supports the increasing demand for fresh market vegetables in Northern New York as evidenced by a new Produce Auction in Franklin County, a food hub project in Jefferson County, and the addition of high tunnels on farms regionwide.

Good news for farmers looking for land in N.Y.