Home / California / Value–added Angus feeder cattle capture extra bid on sale block
A new user experience is coming! We'll be asking you to login to your Morning Ag Clips account March 1st to access these new features.
We can't wait to share them with you! Read more here. 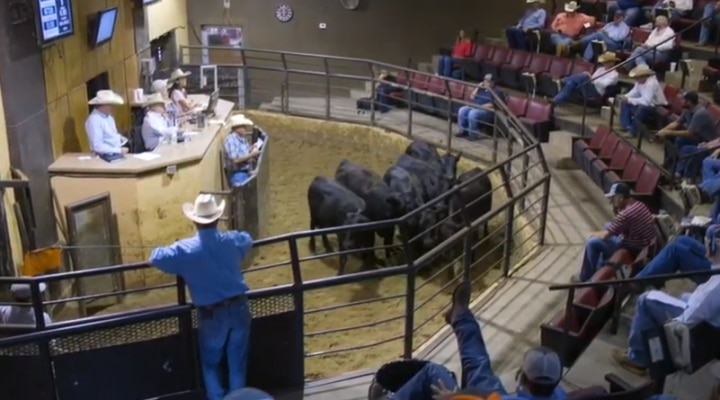 “I think it’s important that we continue to look for different tools in the toolbox,” said Kelli Payne, Oklahoma National Stockyards President. “In putting all of this together it was – let’s give these producers that are doing the right thing—preconditioning their cattle, improving their genetics—let’s showcase them.” (Angus TV, YouTube)

OKLAHOMA CITY — The goal of the commercial cattlemen is to produce and sell cattle that make buyers sit up in their seats as their cattle hit the sale ring. On August 10th the Oklahoma Angus Association held the second AngusLinkSM Feeder Calf Sale in Oklahoma City with the help of the Oklahoma National Stockyards and the American Angus Association® and value-added cattle did just that.

“We wanted to provide a vehicle for those high-quality Angus calves to get in front of premium buyers,” said Roger Wann, Oklahoma Angus Association sale committee member.

Separating these calves from the commodity mix by documenting them makes sense for the sellers and the buyers, Wann said.

Of the over 1,200 head of cattle that went through the sale ring, those enrolled in value-added programs like AngusLink proved valuable as steer calves average $10.28 per hundredweight (cwt.) more over similar weights and heifer calves averaged $6.13 cwt. more than similar weights, according to the USDA sale report.

“I think it’s important that we continue to look for different tools in the toolbox,” said Kelli Payne, Oklahoma National Stockyards President. “In putting all of this together it was – let’s give these producers that are doing the right thing—preconditioning their cattle, improving their genetics—let’s showcase them.”

In a year where uncertainty is evident, securing the extra bid at the sale block may be more important than ever, Payne said.

“Our thought is, you’re already doing the work so why not get paid for it?” said Troy Marshall, American Angus Association director of commercial and industry relations. “AngusLink just verifies to the buyer that the producer put the extra work in and helps them bring home extra premiums on sale day.”

Keeping progress in mind the next Angus Feeder Calf sale is scheduled for December 7, at the Oklahoma National Stockyards. To consign, cattle should be Angus sired, meet the Certified Angus Beef ®  live specs, be weaned for at least 60 days and have had two rounds of any major herd health companies’ vaccination protocol. To add extra value, it is recommended to verify age, source and Angus genetics through AngusLink to reach extra premiums.

“No matter if it’s AngusLink or a simply a preconditioning program, find something that works for you,” Payne said. “Find someone that you can trust and let them to walk you through how to put every available cent back into your operation.”

For more information on the upcoming sale contact the Oklahoma National Stockyards or American Angus regional manager, Jeff Mafi. To enroll cattle in AngusLink visit the website at AngusLink.com.