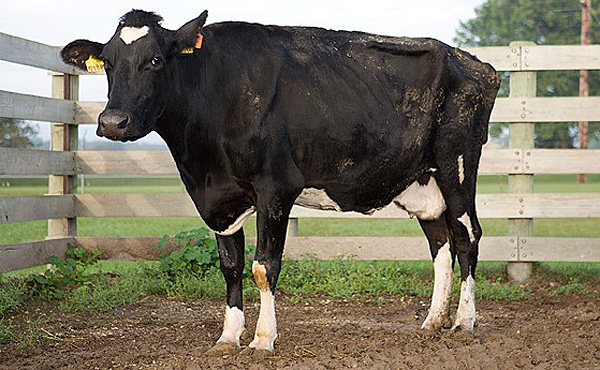 A cow naturally infected with M. avium subspecies paratuberculosis that is in the late stages of disease and has typical clinical signs such as weight loss, watery diarrhea, and general poor health. This cow is part of a study herd used in research on Johne’s disease at the National Animal Disease Center, Ames, Iowa. (Photo by Peggy Greb)

WASHINGTON — A team of Agricultural Research Service (ARS) and university scientists is investigating a new “ingredient” for use in vaccinating cattle against Johne’s disease, a chronic wasting affliction that costs the U.S. dairy industry more than $200 million per year.

The ingredient in question is a type of protein on the surface of the bacterium Mycobacterium avium subspecies paratuberculosis, which causes Johne’s disease.

The researchers found that the protein, dubbed 35 kDa membrane peptide, helps the bacterium invade epithelial cells lining the cow’s small intestine, thickening it and blocking the uptake of nutrients from feed or forage. This can lead to diarrhea, weight loss, diminished milk production and sometimes death. Calves are especially vulnerable and if their mothers are infected, they can acquire the bacterium from the colostrum of their mothers. Adult animals typically become infected after grazing on forage or pasture areas where MAP has been excreted or “shed” in feces.

Vaccinating the animals with dead MAP cells can prevent such fecal shedding; however, this process can also generate misleading results called false-positives when vaccinated cattle are tested for bovine tuberculosis, a disease caused by a close relative of the bacterium.

An alternative approach could come from vaccinating the animals with specific pieces of MAP rather than using the entire bacterium, notes John Bannantine, a microbiologist with the ARS National Animal Disease Center in Ames, Iowa.

Toward that end, he and colleagues from Washington State University and Inje University in Gimhae, South Korea, devised a new laboratory procedure called an ex vivo bacterium viability assay. Using it, they evaluated the peptide’s potential as a vaccine through its ability to mobilize certain immune system cells in blood samples drawn from infected cattle rather than using the animals themselves.

The results, among others reported in the May 2019 issue of Vaccine, showed that the peptide helps prime immune cells called cytotoxic CD8 T cells to seek out infected cells and kill MAP bacteria present within them. There is no haven from cytotoxic T cells, adds Bannantine, with the ARS center’s Infectious Bacterial Diseases Research Unit.

Upcoming studies will focus on ways to formulate and deliver the peptide. Once there is a successful formulation, they will conduct cattle vaccine trials. Ultimately, the research could open the door to a new way of preventing Johne’s disease without interference with bovine tuberculosis tests.