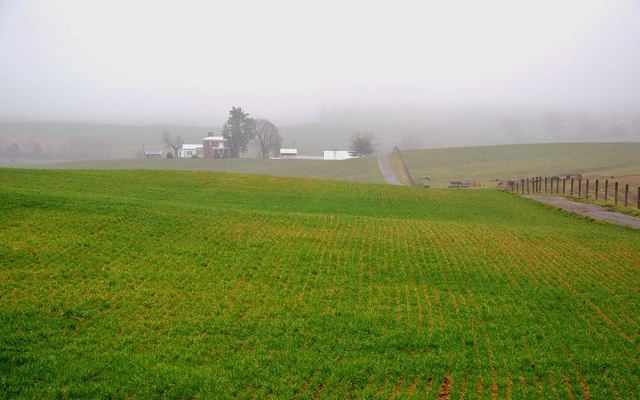 The average value of an acre of U.S. farmland rose $50 to $4,100 last year, according to the U.S. Department of Agriculture’s 2019 cropland value report. (photo by nrg_crisis, creative commons/flickr.com)

That matches the record set in 2015 and is positive news considering how the current trade war with China is hurting U.S. farmers. But other economic indicators are putting stress on Virginia’s farm economy as well, said Tony Banks, a commodity marketing specialist for Virginia Farm Bureau Federation.

Many farmers rent land. The national cash rental rate for an acre of farmland is $140 a year, while in Virginia it currently averages $59. Over the past five years Virginia cash rental rates declined 6.3%—the largest decline nationwide.

“The fact that the rental rates and the rate of increase in farmland values have slowed is indicative of the continued stresses on agriculture’s economy here in Virginia,” Banks said. “Low commodity prices, the loss of export markets and rising labor costs all are putting downward pressure on land rental prices. After all, there’s only so much you can afford to pay for rent when you’re not making much money.”

He added that the problems facing the dairy industry and the tobacco sector are all having an impact on land values and rent paid for Virginia farmland.

Virginia’s dairy industry has been rapidly declining the past two years, with dozens of dairies closing due to low milk prices. Additionally, the latest Virginia crop report estimates tobacco acreage declined 30% this year, adding to declines over the past five years, Banks explained. While no longer the dominant cash crop in the state, tobacco was a still a major income source until recently. Virginia tobacco farmers have been hurt by the decrease in exports this year.

“Lower revenues are bound to lead to some sort of contraction,” Banks said. “Maybe growers don’t rent as much land next year, or maybe they’ll rent only the most desirable tracts and drop others that are less acceptable or have lower yields. By and large, most farmland rentals in Virginia are done with a handshake, so this will change quickly from year to year.”

Media: Now is the time to shine!