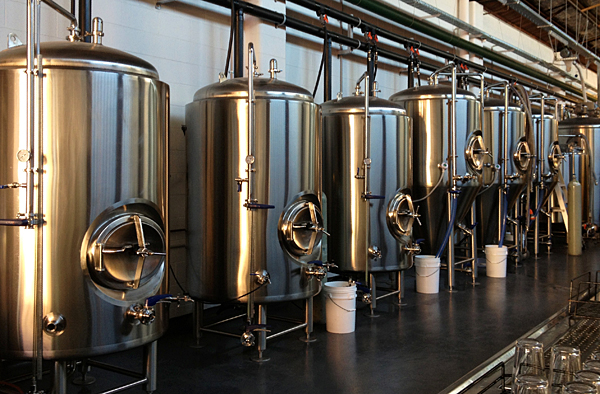 Dragon Run Brewery is scheduled to open inside the big red barn in the summer of 2018 and will be King William's first brewery. (Wikimedia Commons)

RICHMOND, Va. (AP) — If you listen closely you can hear them, the whispers of history that move among the sturdy wooden beams of the old Prestley Park barn in King William County. For more than 90 years, the looming structure perched just a stone’s throw from the Pamunkey River and on grounds once home to the heart of Chief Powhatan’s nation has served as a familiar beacon to anyone traveling east on U.S. 360.

Its candy-apple red exterior and shiny tin roof, the result of some much-needed TLC several years ago, is a stark landmark against the open fields and farm lands that fall behind it.

And while it’s been vacant for 40 years — having outlived its original purpose as part of a dairy farm dating back to 1925 — Prestley Park stirs again, this time with spirits of a different kind.

Dragon Run Brewery is scheduled to open inside the big red barn in the summer of 2018 and will be King William’s first brewery. Betting on the success of the ever-expanding craft beer market within Richmond and central Virginia, the brother-and-sister duo of Tommy and Lindsay Adkins is taking a leap of faith on that old adage that if you build it, they will come.

Or, more specifically, if you put your heart and soul into a charming 92-year-old barn with the promise of offering both quality craft beer and a hearty helping of history, they — locals and outsiders alike — will come back again and again.

With Lindsay Adkins as the brew master and her brother as chief executive officer, Dragon Run will offer up to a dozen beers on tap — casks and nitro taps — with names like Big Red Barn Red IPA, Prestley Park Milk Stout, Cohoke Pumpkin Spice, Paddlin’ Pilsner, Mud-boggin’ Brown and 1725 Courthouse Altbier (named for King William’s courthouse, which was built in 1725 and according to the county, is the oldest courthouse building in continuous use in the US.)

Some will be offered year-round, such as Tom’s Coffey Stout, a tribute to the Adkins’ grandfather, and while they’ll have at least one IPA on tap, they’re going heavy on varieties with “strong malt backbones,” Lindsay Adkins said.

The two-story barn will feature a tasting room on the first floor. A limited food menu will be available anytime the brewery is open and will feature barbecue and local seafood — basically “a food truck without the truck,” Tommy Adkins said. The second phase will be the barn’s upper level, which will serve as a rustic space for wedding receptions and other events. Live music on an outdoor patio plus areas for both dogs and children round out the plans — for now.

Construction inside the barn is scheduled to begin within weeks.

In an area teeming with history and as yet previously untapped (pun intended) when it comes to the craft beer movement, the Adkins hope to bring new life to an old venue one pint at a time.

Dragon Run Swamp is part of a watershed that snakes through Virginia’s middle peninsula counties of King and Queen, Essex, Middlesex and Gloucester. It’s significance was noted and mapped as far back as 1607 by Capt. John Smith during his early explorations of the area, and today is part of a swath of protected land including more than 9,000 acres of Dragon Run State Forest.

They grew up hunting and fishing in what the locals refer to as “lower county” in King and Queen and it’s that connection that prompted the Adkins to open their brewery near where they grew up.

Tommy Adkins is in the process of moving back from Raleigh, N.C., where’s he worked for nearly a decade in the hospitality industry. Linsday Adkins is a forensic toxicologist in Richmond, but will work for Dragon Run full time once it’s opens.

They’ve both been home brewing for about seven years and talking about the idea of their own brewery for the last five. There’s no sibling rivalry here — Tommy Adkins quickly defers to his chemist sister as the better brewer.

“I did it first,” he said, “but she quickly picked it up and quickly surpassed me.”

A science-minded beer lover, Lindsay Adkins said brewing combines both of her passions, and “it’s something that I take a lot of joy in, from research to developing recipes to creating a delicious product that makes me proud.”

They did agree on one thing early on: wherever they ended up, they would name their brewery Dragon Run.

“Dragon Run itself embodies so much more for us than its location,” Lindsay Adkins said. “It means home, community, family, history … and a place to enjoy the beautiful nature of Virginia.”

The name was a no-brainer — finding the right venue was not.

After getting the unanimous OK from the county’s board of supervisors in March, Tommy Adkins said he and his sister began looking throughout King and Queen for an older building that they could re-purpose — old homes, plantation houses, general stores and more.

Both King William and King and Queen “have a lot of history and we want to feature that history,” he said. Nothing appealed to them, however, and after coming up short on a few properties, on a tip from the current owner of Prestley Park, Carroll Lee Walker, the Adkins said they reluctantly took a look at the barn. One step inside sealed the deal.

“It is a gorgeous structure, beautiful property, an amazing location and so very historic to the area,” Lindsay Adkins said. “Growing up in the country and in this area, we know how tough it is to find a place that is comfortable and convenient.”

They currently lease the barn, on seven acres, from Walker. Another smaller pre-Civil War barn that sits nearby may be used down the road for office space or to age barrels.

King William Board of Supervisors Chairman Travis Moskalski said Dragon Run’s presence isn’t just good for business, it’s another opportunity for local residents to support their own and those connections go a long way in rural communities.

“It’s a good opportunity to not only bring in people who will travel for good beer … it’s another offering for the community,” Moskalski said, noting that Prestley Park “is really going to make (the brewery) a landmark.”

He added, “It’s something to be proud of.”

Tommy Adkins acknowledged that King William isn’t a hub of craft beer like Richmond’s Scott Addition, but that that can also work in their favor.

“We have to give (customers) something they can’t find” in other areas, he said, because rather than just relying on the local customers, “we want to bring in people from Mechanicsville, the 295 corridor” and elsewhere.

Lindsay Adkins said the barn itself isn’t related to Dragon Run, but by using local and Virginia products for their food and beer and “putting an emphasis on sustainability and giving back to our community, we are putting together all the pieces that will make it home — and therefore (it’s) Dragon Run to us.”

How to seek help with retirement planning

Mysterious seed packets may be connected to e-commerce scam
August 6, 2020

Virginia brewery, farm help each other out
August 7, 2018