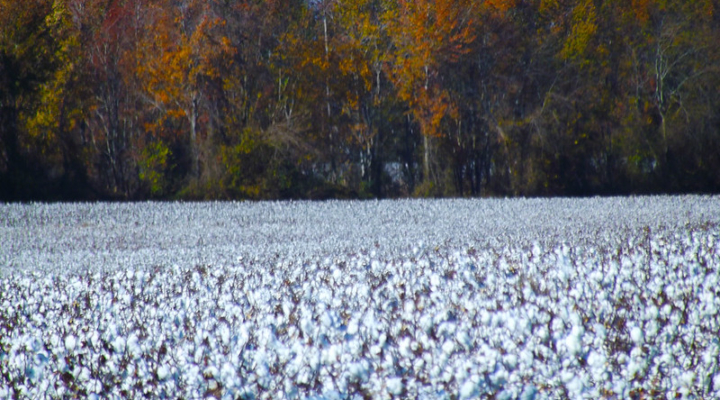 Virginia cotton production is expected to total 220,000 bales, a 22% increase from 2018, according to a recent crop report from the U.S. Department of Agriculture. (photo by Tiffany Dibble, creative commons/flickr.com)

FRANKLIN, Va. — Cotton and peanut growers are expecting a robust harvest this fall, despite an extremely dry end to the summer.

Virginia cotton production is expected to total 220,000 bales, a 22 percent increase from 2018, according to a recent crop report from the U.S. Department of Agriculture.

“We’ve had a good crop this year despite the dry weather this summer,” said Suffolk farmer Joseph Barlow III. “Cotton can take a little drought; it actually likes a little bit of stress. It can make up for it when you go through three to four weeks of no rain.”

“We would have seen more if we had gotten more rain from the hurricane season, but the Labor Day rains didn’t come,” noted Dell Cotton, executive director of the Virginia Peanut Growers Association. “Peanuts don’t need a lot of rain, but they need it in a timely manner. After being as dry as it was this year, I think we’ll be pretty pleased.”

Carryover peanut stocks from previous years are still depressing peanut prices, Cotton explained. The 2017 nationwide peanut harvest was abundant, so many peanuts are still in storage and it usually takes a few years to sell the supply.

“I think we may see a few more acres planted in peanuts in the future,” Cotton added. “August was completely dry, and yet we are seeing very little reduction in yields this year. We just hope there’s an uptick in prices to make peanuts more profitable for growers.”

“We still have tobacco in storage that was purchased last year for export to China, waiting for the trade war to die down. That means there was very little or none purchased by China this year.

“Just as important is the continued decline of American smokers. That’s been dropping since the early 1970s.”

Troops transitioning to agriculture can get tips at conference
March 8, 2020