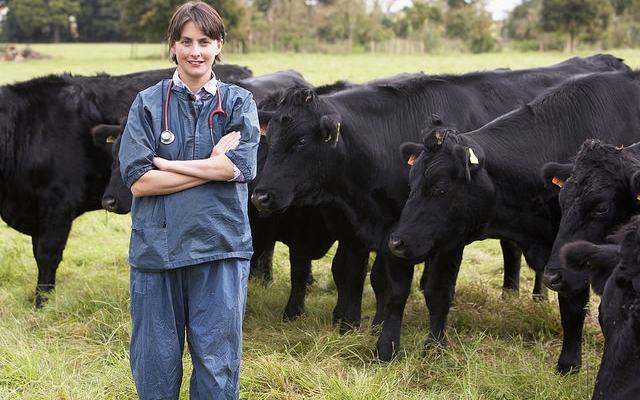 Common procedures such as castration and dehorning have long been considered potentially painful for animals, but only relatively recently have products and techniques come to light for veterinarians to use to reduce pain associated with these surgeries. (USDA via Flickr)

BROOKINGS, S.D. — Providing pain control prior to and following surgical procedures is becoming more commonly accepted – and requested – by producers for their food animals.

That was one of the messages brought to veterinarians by Dr. Bob Streeter, a veterinary clinician from Oklahoma State University, during the 2018 James Bailey Herd Health Conference, held February 10, 2018 on the campus of South Dakota State University.

Common procedures such as castration and dehorning have long been considered potentially painful for animals, but only relatively recently have products and techniques come to light for veterinarians to use to reduce pain associated with these surgeries.

Streeter explained that there are some benefits to the presence of pain: it’s the physiologic response that makes the animal protect an injured part of the body, for example. When pain becomes chronic, however, many adverse effects on the animal have been documented, including impaired immune, cardiovascular, digestive, and neurologic functions.

Furthermore, for some animals, the physical and psychological stimulation present during some painful conditions can wind itself up to the point where severe stress sets in.

Veterinarians commonly use medications to preempt pain in surgical situations. One of the most common examples is the use of local anesthetics to block nerves when preparing for surgery such as a C-section or displaced abomasum correction. However, these medicines are also increasingly being used by veterinarians prior to more minor surgeries such as dehorning and castration.

In a similar manner, providing medications that will inhibit pain for hours or days following the procedure is also becoming more accepted. Just as a person might take a pain reliever after a minor surgical procedure, veterinarians can give similar medicines to animals.

Barriers & Challenges
Even though the benefits of pain relief for food animals have been increasingly well-documented, barriers to their use still exist.

These include drug residues, cost, worker efficiency, routes of administration and availability of the medications.

Since these treatments are applied to food animals, the risk of drug residues is a serious consideration.

Veterinarians are usually able to use these medications under extra-label drug use provisions, but it is then up to them to determine an appropriate slaughter (or even milk) withdrawal to implement.

A major stumbling block for many producers and veterinarians is that the fact that giving a local nerve block or administering pain medication represents extra work steps and slows down the processing of large numbers of animals.

As time goes on, however, veterinarians are devising ways of more quickly administering local anesthetics and pills in the course of chutework.

The release onto the market of a transdermal (pour-on) non-steroidal analgesic for cattle may hold promise for even more efficient treatment with pain relievers.

In Summary
It’s likely that at least some animals on food animal operations can benefit in some manner from the information learned by the veterinarians at this year’s Bailey Conference.

This information will just become more valuable – and more refined – over time as pain prevention and relief become more ingrained in the everyday operations of farms and ranches.